It sprinkled off and on, but it was warmer and clearer than I expected so I sprang into action. I was hoping to see a movie this weekend, but I can always see a movie in the rain- can’t effectively garden when it’s pouring so the silver screen can wait.

I have moved the mint thunderdome and succulent pots from the former home, and now they’re elsewhere in the garden. The thunderdome got a trim- hopefully that will promote more mint growth in spring. 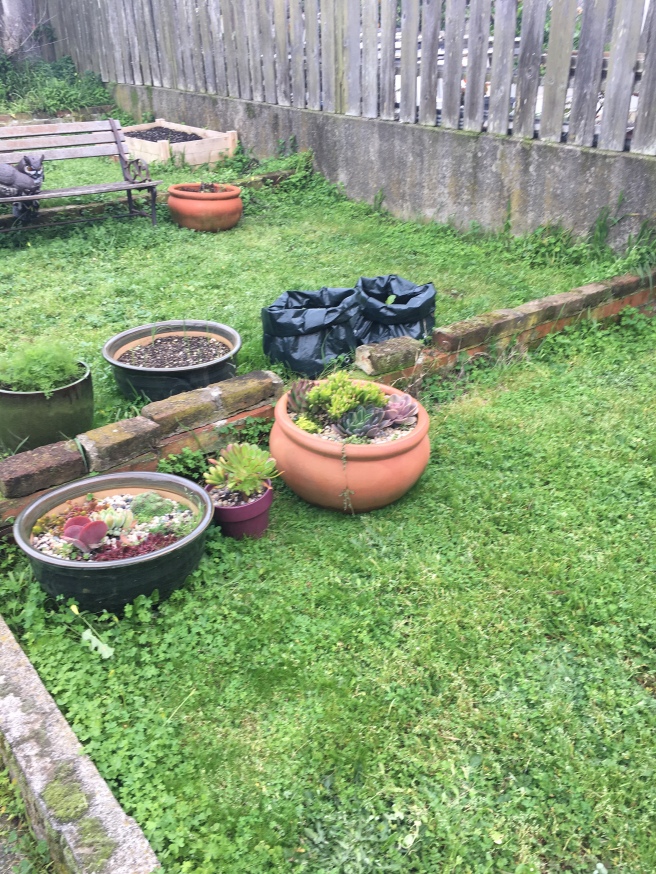 There’s the new home of the terra-cotta succulent pot and the little purple pot. Eventually the succulent pots will go in front of the house but thats a while off.

Why am I moving everything around? 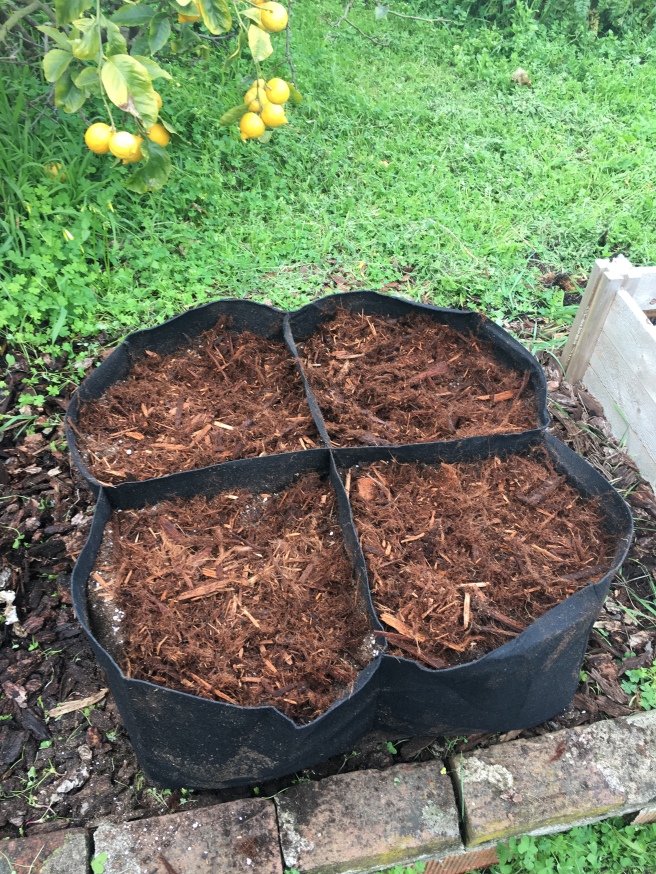 So I can place my new fabric bed where the other pots were of course!

I really have to update the map of the garden…

It took all the soil I had left to fill it, plus mulch on top. It will be a while before my Joi Choi seedlings are big enough to be transplanted outside, but I wanted to make sure the bed was there when I needed it. This is in a semi-shaded area of the garden which doesn’t make a ton of sense for mint but makes good sense for things like Bok Choy. 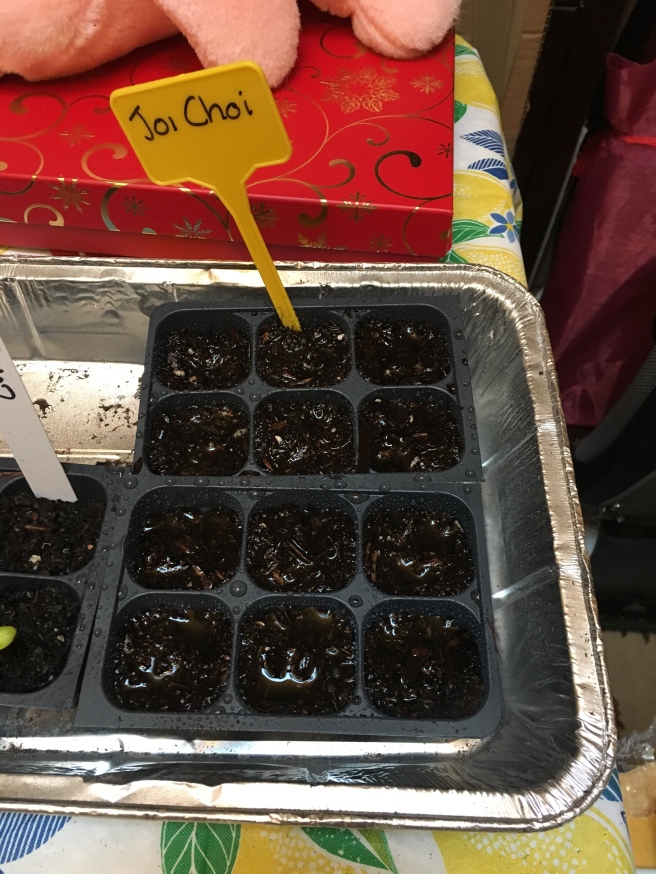 In other seedling news the greenhouse seeds seem to be doing ok, but the stems are a bit spindly. I might have to transplant the sunflowers to larger plastic pots soon- but as I used up all my soil it will have to wait. I was planning on Wednesday being the soil day for the new beds- but it looks like I’m going to have to go tomorrow first for 2-3 bags for other garden use. 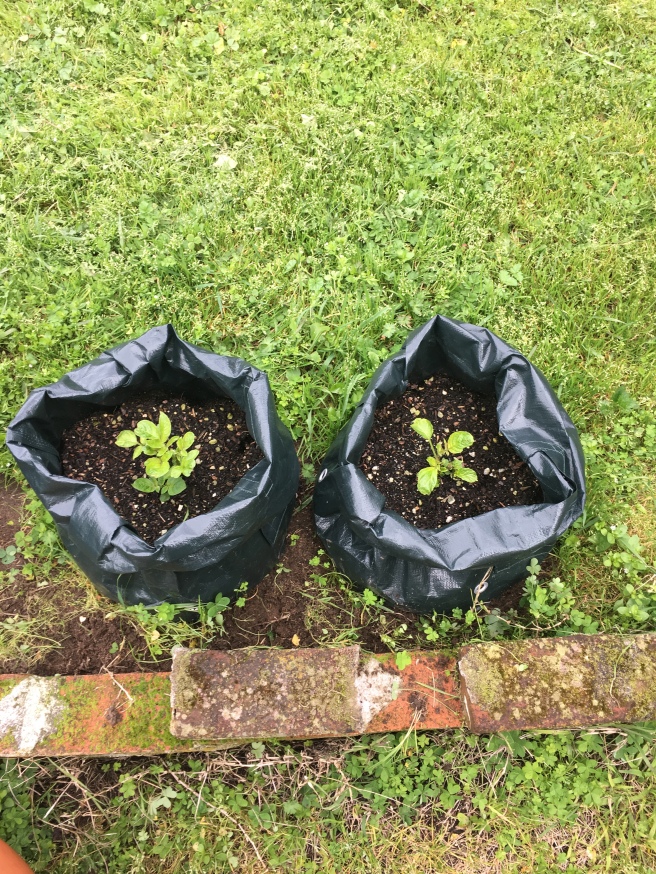 In really good news it looks like the potatoes are doing well. The one on the right had some scary damaged leaves which had me anxious about blight- but it seems to have rebounded. I’m quite happy with it. 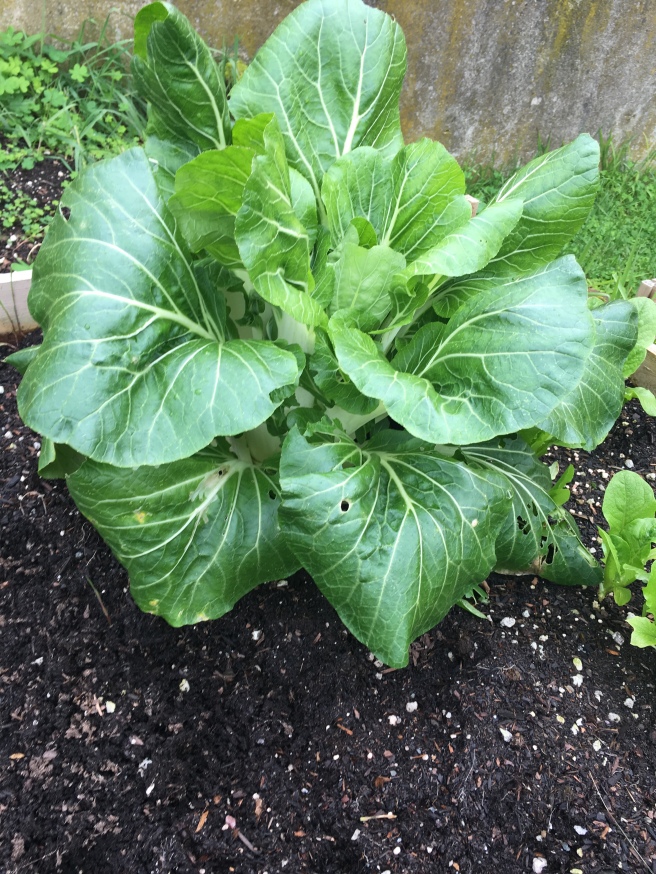 The last remaining Bok Choy looks more than a little eaten. It’s going to get eaten either today or tomorrow- but I need to get some more soil to level off the area in preparation for zucchini.

The radishes in the mixed bed have come up- but the purple peas have not. It looks like once again the over-much rain has caused the baby peas to force themselves up too early and not develop good roots.

So I’m starting some indoors!

I’m not taking any chances, I want my peas!

I’ve already harvested most of the harvestable chard- and tonight I’ll do the same to the arugula. That’s because the soil temperature in the back has finally reached bean temperature. So these plants are going to get ripped out in favor of green beans soon enough.

Speaking of harvests, I’m starting to get some great carrots when I thin.

I over-sowed a bit when I planted the carrot bed- my bad. But it’s hard to regret it when the thinnings are so delicious. That middle one is a yellow carnival blend carrot, I’m surprised it got that big.

Finally, the rosemary has decided it’s spring. It’s flowering all over, and has begun to attract the first bees. I couldn’t get a picture but the whole time I was working in the garden today I was followed around by a big fat bumble bee. That’s really good news for tomatoes later on- bumble bees are the best pollinators for tomatoes.

Wednesday is the big soil day- but tomorrow looks like it’s going to my first opportunity to get pole bean sets if they’re available this early.

Spring is coming, and I am ready for it!