Today was a busy day. Actually a busy couple of days, but that’s not important.

A lot of what I’ve been doing is watering now that we’ve had some clear weather- it’s sunny but cool. Heat evaporates water in the soil, but the chief evaporator is the sun- so even though it’s not even above 55 most days- I’ve had to water a fair amount last couple of days.

Part of that of course is the plants I’ve been putting in- new transplants need water no matter the weather. Both the mints and the chervil seems to be doing well- but so are the herbs I put in last month which is a sigh of relief. 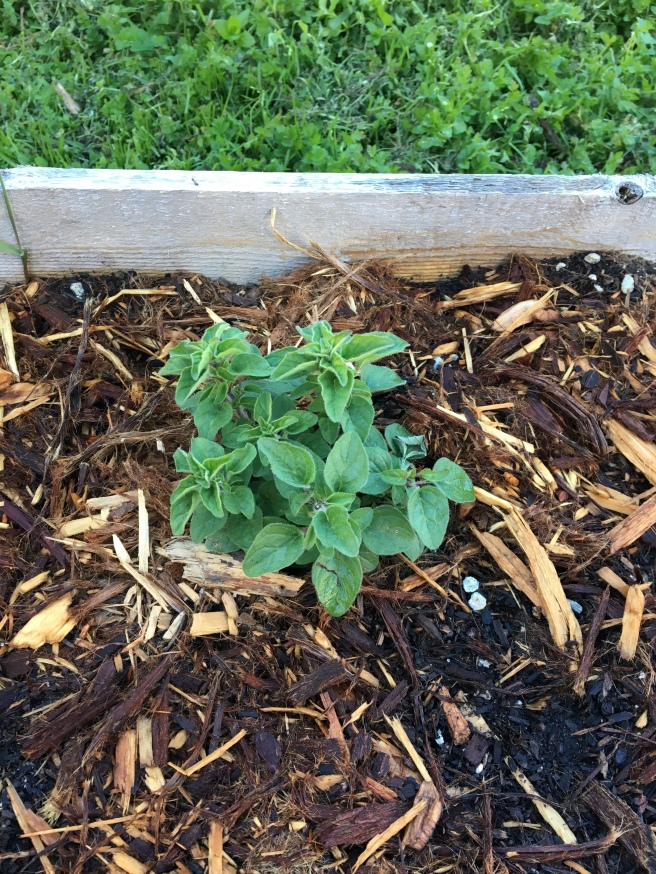 Here’s my pretty Italian oregano which took pretty much immediately. All the herbs are growing well.

Today when I got outside to start work- I had a visitor. 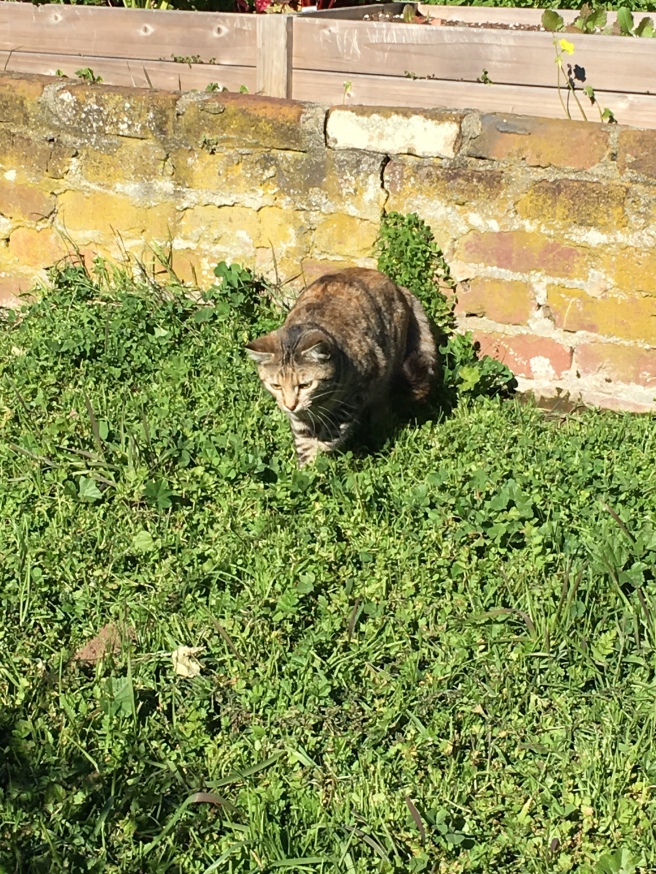 He or she is a local kitty, I think one of the ones born last year, and this one and their siblings keep taking vacations into my garden. I’m pretty sure this is the one who put his paws in my arugula pot- and here you can see them hard at work looking at a vole hole. The minute he saw me he went “?!!!!” And sprang backwards over the fence in fear. Entertainingly he kept coming back to keep tabs on my work. 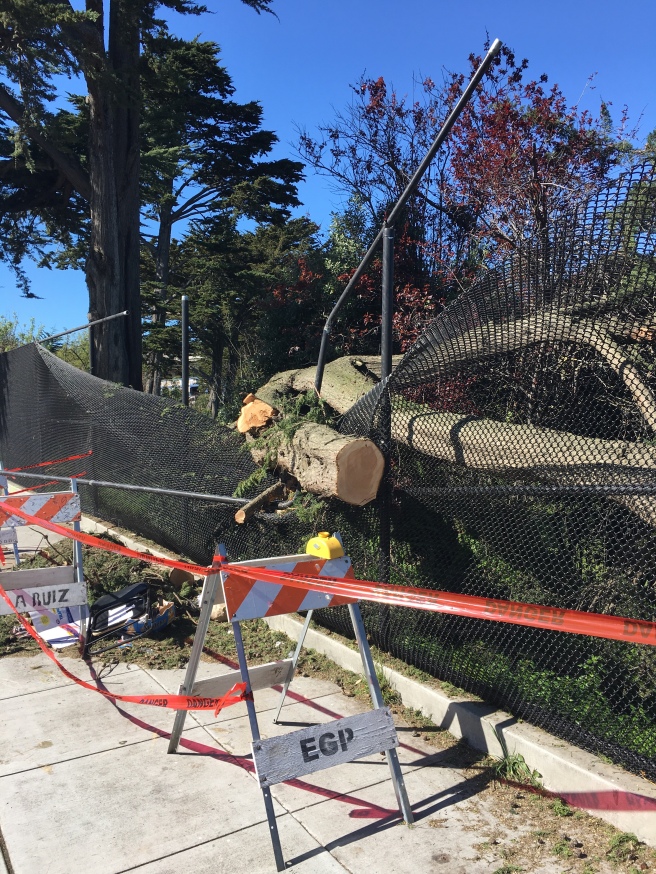 In local news outside of my garden- here’s the toll of the wind and rain, a tree got knocked over in my local park and crashed through the fence. Which illustrates how nutso the weather was, and will be. Its clear for now, but my wish of a longer spell of dry weather has not been answered- it looks like scattered showers or worse are in San Francisco’s future. Hopefully no more downed trees will follow. 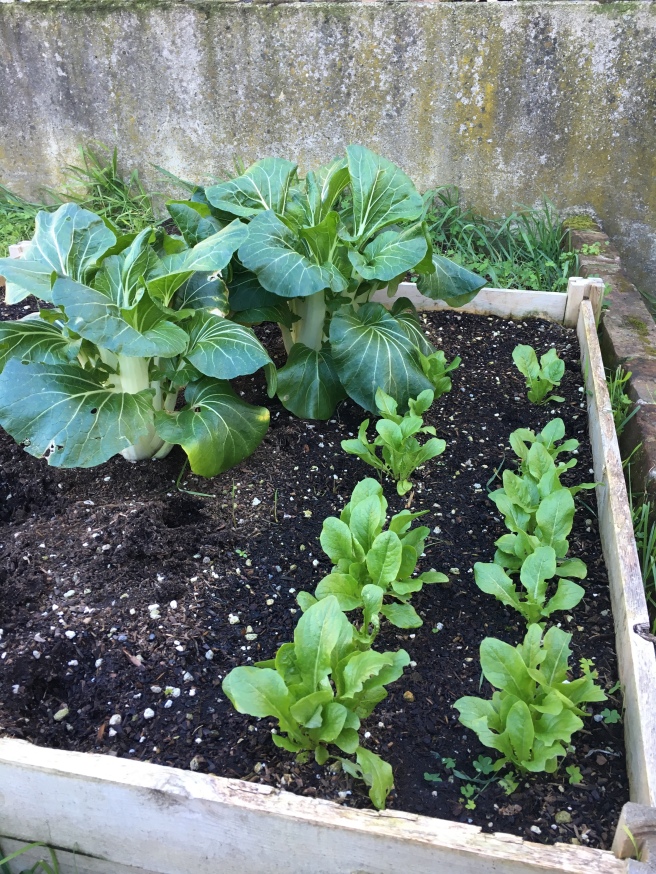 I pulled the purple Bok Choy, which for whatever reason had totally passed from edible to stringy stalks- so the Joi Choi can survive until I can eat them. And I will be eating them- they are delicious. Into the compost bin with the non leafy Bok Choy’s!

And look at those lettuces! I am a total convert to the temple of raising lettuce from seed.

And speaking of seeds… 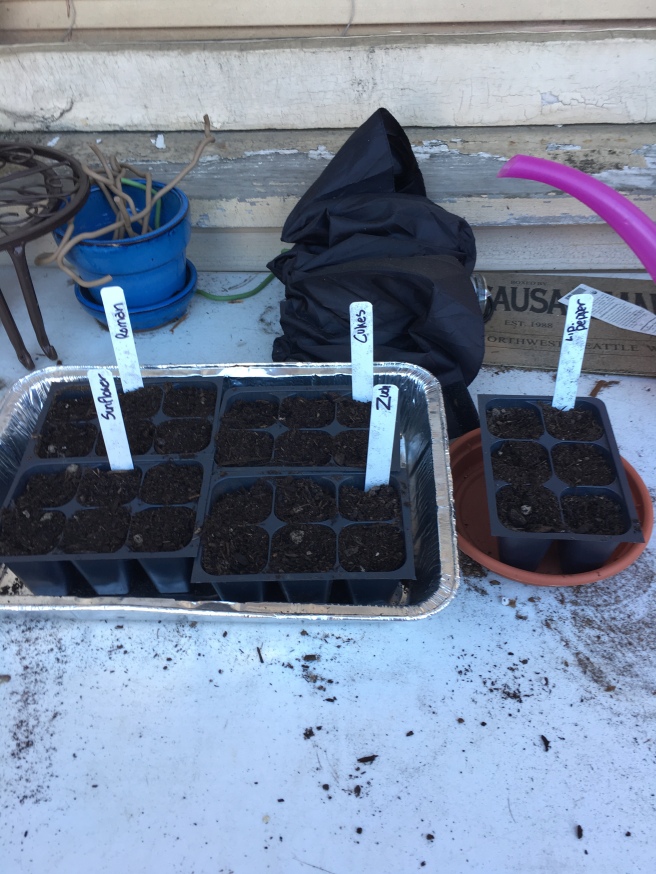 I started several seeds in little seedling pots. Specifically I started 6 sunflower seeds, 6 romanesco broccoli, 6 cucumbers, (3 telegraph 3 Boston pickle) 6 zucchini (3 Nimba 3 green bush) and 6 lipstick peppers. They are all living inside for the moment- as I don’t trust the wind and temperature outside. I used regular potting soil mixed with a little sure start, as I tried some seed starter mix and it was so damn light it wouldn’t take water. Potting soil is better.

Once these sprout it’s off to the greenhouse bench with them! But that will be several weeks from now. 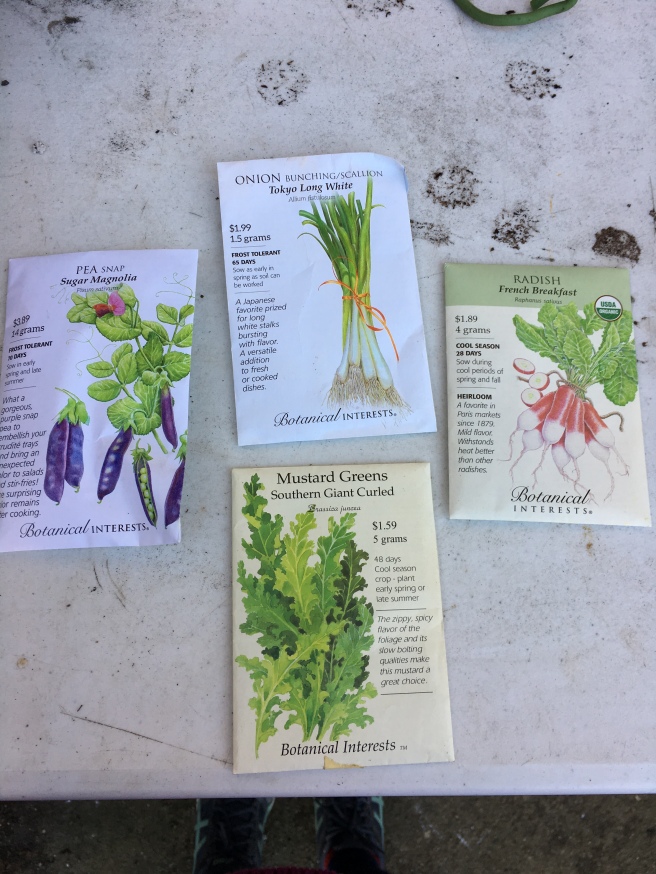 The spinach bed has been overgrown and weedy for too long, so I pulled the spinach and amended the soil so I could plant by seed.

A back row of purple snap peas, a row of radishes, a zig zag row of mustard greens, and a final front row of green onions, since only a few of the green onions I planted in the big 4×4 bed have sprouted. 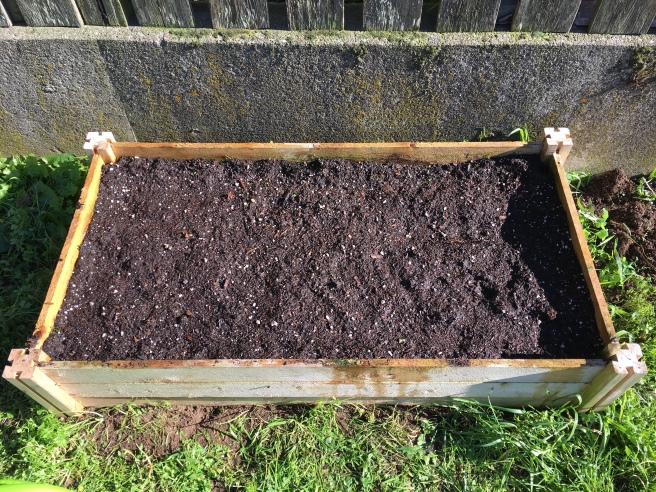 Now that’s some sexy dirt. We’ll see what takes in the temperature and upcoming wet, but that’s why I’m starting with peas that have a lot less stringent temperature requirements than beans.

Of course I was being spied on while I worked…. 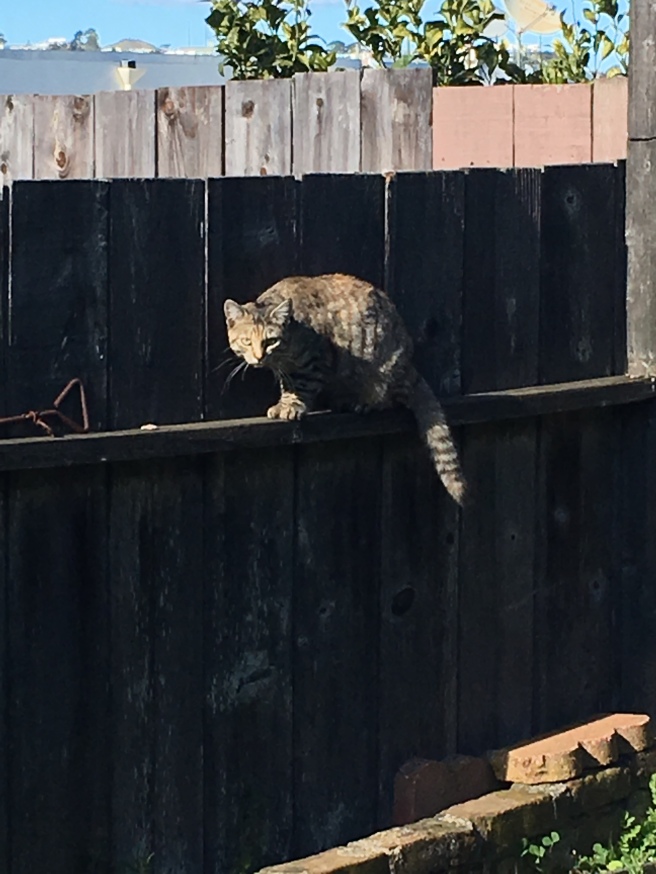 Spooky! Kitty kept coming back as I worked and then fleeing as soon as I turned to coo at it.

I wish no one in the house was allergic, otherwise I’d try to befriend the poor feral. But me and mom would need hospitalization after being close to a house cat so it is what it is. At least kitty and his siblings take care of the rats. 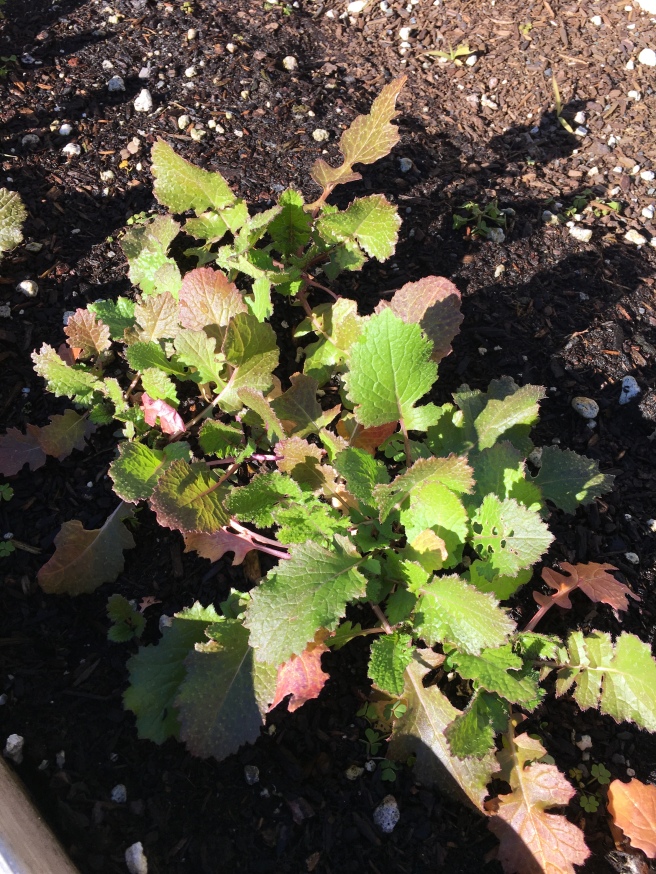 The turnips are starting to look really pretty in the evening sun. Turnips never fail me. 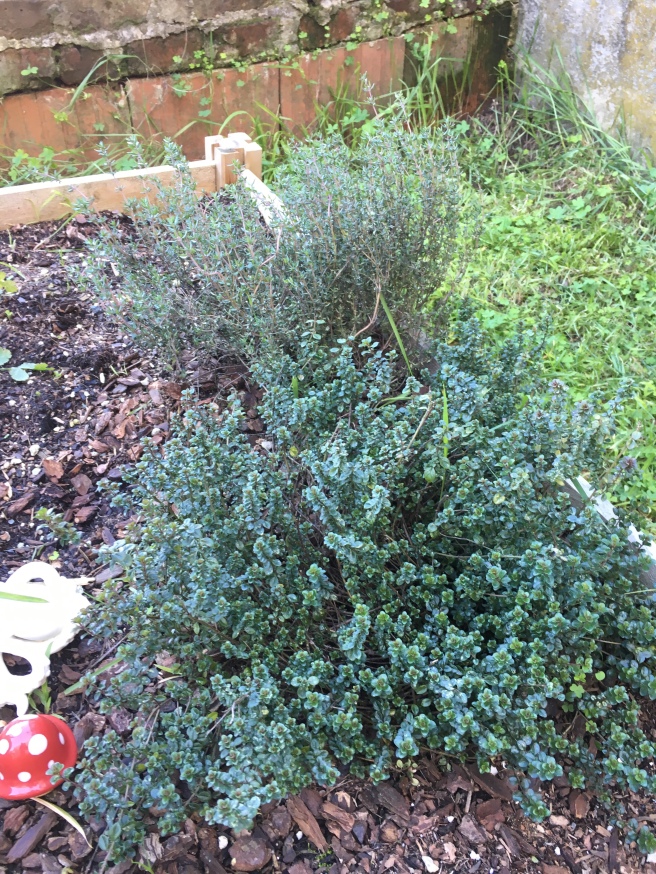 Speaking of the infallible, look at that thyme! Both plants, big leaf and French growing huge after all that rain. Thyme is like mint in that it should probably be in a pot- but it’s less of a wanderer than mint so you can take a chance on it. It’s definitely more thyme than I can eat, but it’s pretty and it smells good so who cares! 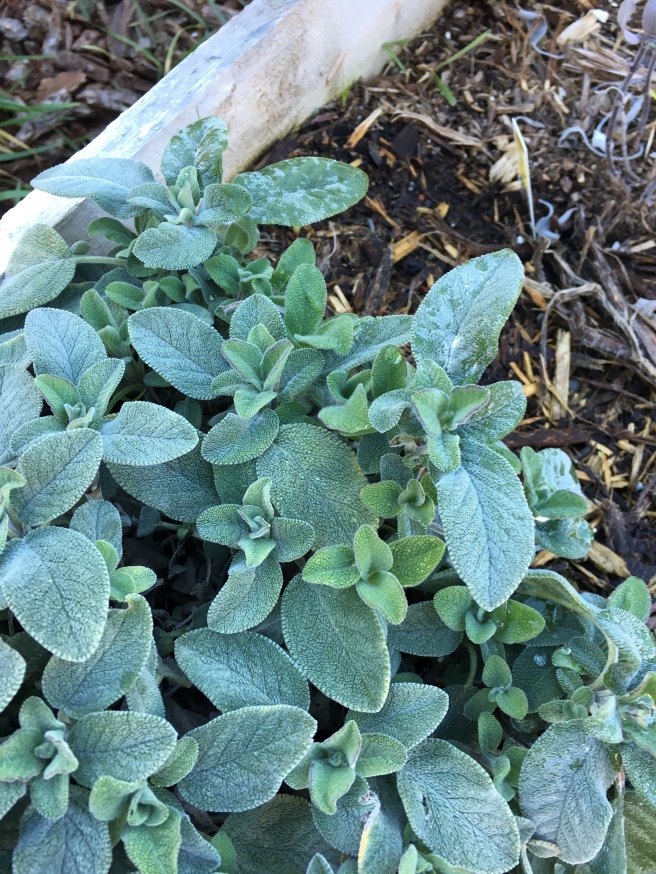 And look at that sage! It’s throwing up new leaves! Finally! It looks like it took a rainfall to finally wake up the herb but now it’s going to do nothing but grow. That’s a nice feeling. 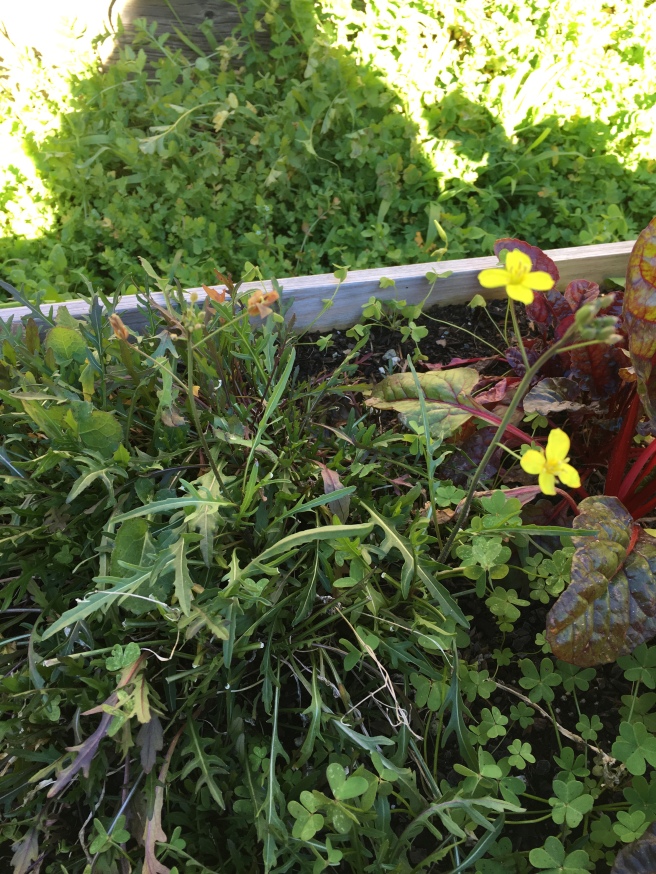 Finally the arugula. It’s basically growing wild which is to be expected when you sow it as thickly as I did. The problem with that is the absolute thicket of oxalis growing underneath it. Pulling all that oxalis without seriously damaging the arugula would be almost impossible so I’ve just given up for now. In a month or less I have to pull up almost everything in this bed so I can plant the back with pole beans so IDK the weeds are going to get it- just not anytime soon.

The most amazing thing happened today- but I couldn’t get a photo of it, no matter how hard I tried. I saw the first bumble bee of 2019! It’s late February but as far as I’m concerned spring has sprung because traveling around the mowed weeds was the fattest little bumble butt. Fuzzy and black with yellow trim, buzzing around looking for flowers, I dropped everything to follow her around but I was sadly unsuccessful in snapping a pic. But she was here! The first bee of the year!

It’s gonna be a good year.

The bees have arrived!