No, I’m not referring to what sounds like the weirdest fan fiction pairing on earth- I’m talking tomatoes!

The weather here got pretty decently sunny and warm and one glance at my two remaining gallon tomatoes got me rolling up my sleeves and getting to work. 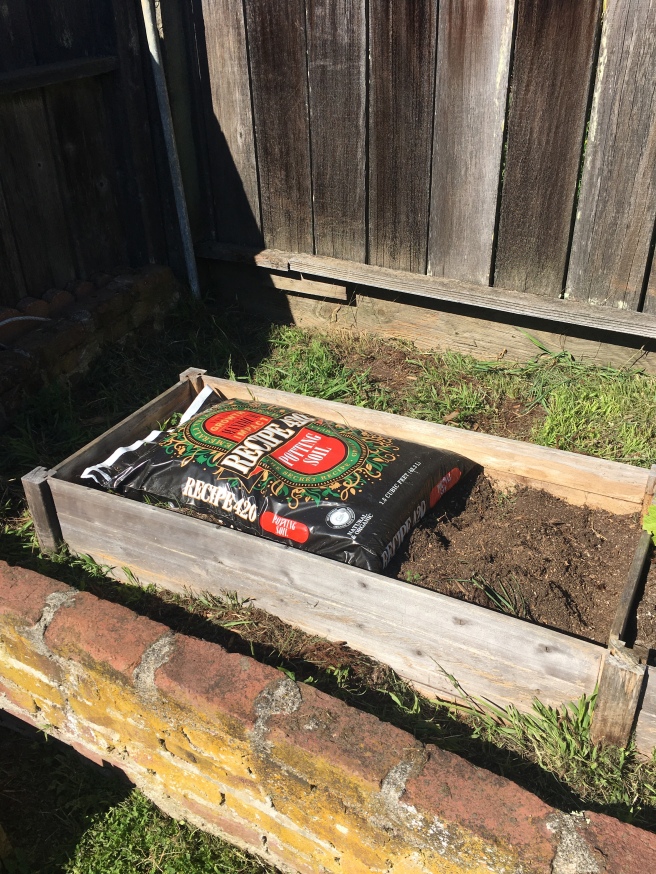 This- the corner bed- is the absolute sunniest spot in the garden. These tomatoes are gonna get blasted with that good south facing exposure.

Of course the soil needed work. So one bag of 420 and some extra fertilizer and chicken manure later- I was ready to figure out the spacing.

One of the problems I’ve had with past tomatoes is that I’m not great at pruning them- so they get a little messy. I tried to de-clutter the spike, but it’s entire being seems to be chaos so I think I’m just going to let it do it’s own thing.

She’s so upright and orderly! A good trim of the bottom leaves and all that stem will become healthy roots! 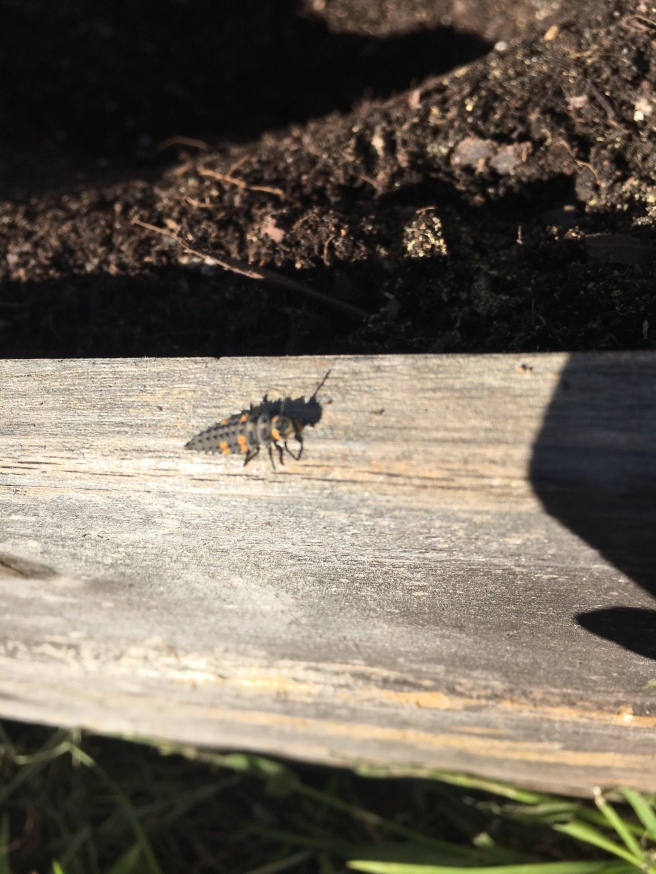 The local ladybug larvae constabulary seem to approve. And I just love that just as my tomatoes are going in a bed, the aphid eaters are ready and willing to defend them. 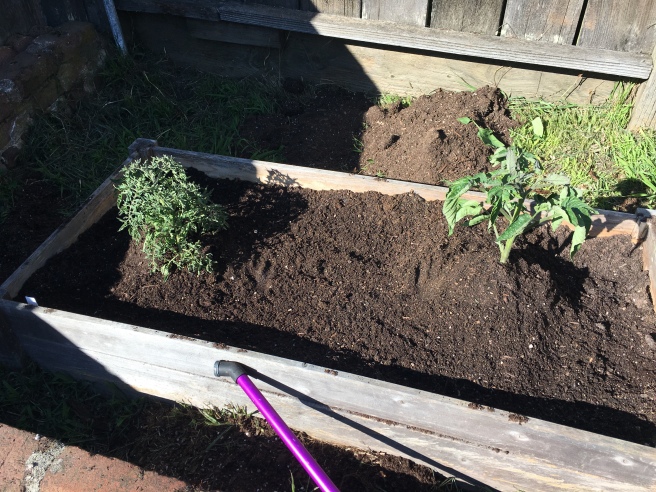 I’m a big fan of planting tomatoes in mounds. It just helps the water drain away, because like a lot of plants that evolved in hotter and drier climates sitting in water is not healthy for them. If you live in a place with consistently hot summers this probably doesn’t matter- but here in San Francisco it will almost certainly rain and fog at least a few times in the next few months, so anything that helps drainage is a bonus. 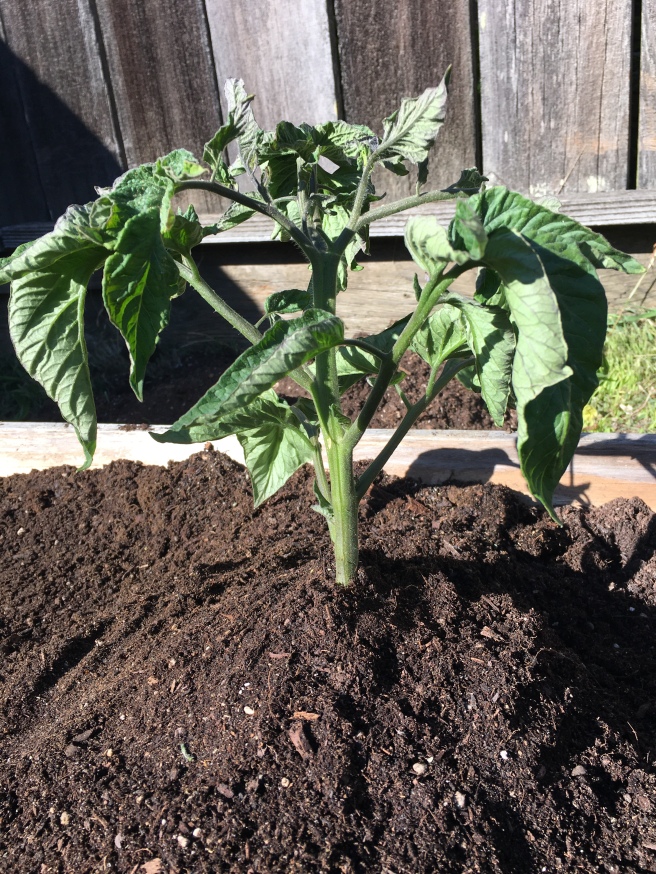 Ah my Julia Child, so upright, so neat and tidy. 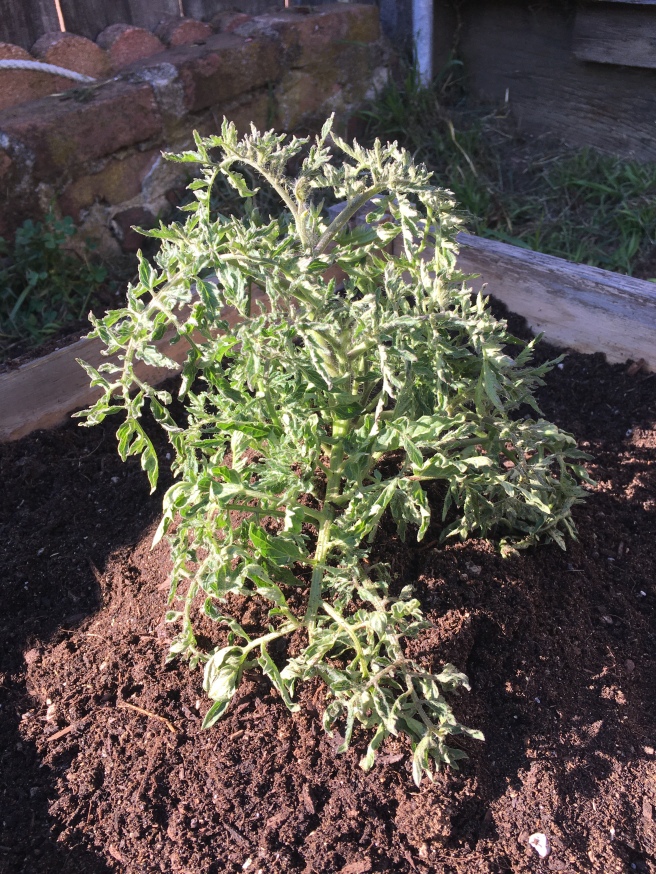 And then there’s spike.

Now unlike my potted tomato I am going to mulch these guys, as I know from experience that this bed just evaporates like crazy. In a pot that’s a good thing because the pot will retain a ton of moisture anyways, but in a bed like this not mulching means after a hot day having wilted tomatoes. 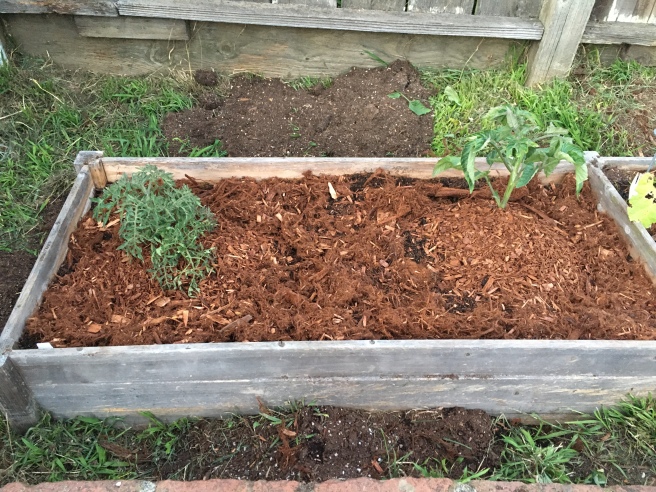 I used the mini bark on the mounds and the shreds in between. I also on a whim sowed some basil seeds under the mulch, but that’s just for funsies I have no expectations.

It’s still a tad early for tomatoes in my neck of the woods, but putting these guys in the ground in mid-April makes a lot more sense then planting them in February.

I’m sure I’ll see the first nasty pink aphids soon enough- but at least the local larvae are on the job.

3 thoughts on “Spike and Julia Child in their new home”