Most of this post could be un-ending cursing just because I may have lost about 20-30% of the plants in my garden due to the absolute bull pucky that is fall in San Francisco, but I’m going to try and not go blue.

We’ll see if I can succeed.

So this was sort of a one-two-three punch. First, we had very very wet weather for a week and half or so- which was welcome even if it caused a few problems. One of the entertaining problems was the sudden cluster of mushrooms in the shade herb bed.

And before you even ask- no I am not eating random mystery mushrooms. I like to live my life on the edge but that is too far thank you very much.

The wet was the return of the fog, but also some morning rain, which was very welcome. It is making my zucchini look very sad though. Powdery mildew is basically the price of doing business in San Francisco. You will get it- it’s just a matter of controlling it. This actually isn’t so bad, I should be able to cut off the worst leaves and despite it being almost November, I should still get the occasional squash until real winter comes.

But then we had the two day heat wave.

Now- I watered well, but it was not enough. As you can see- my garlic chives bit the dust. Also my yerba buena, most of my tarragon and half my parsley plants.

And not to underplay this- when I say heat wave? It was nearly 100 degrees in my neck of the woods. Highs of 97.

Still trying not to swear, but you better believe the blackberry vines were covering their ears the days this happened.

And then- it got worse.

These are the seedlings I have yet to plant. They are inside. Why are they inside?

Because yesterday- oh god yesterday, the santa ana winds came back. 95 mile per hour wind gusts. I first heard them at 3:30 am on Sunday morning, when like all good little neanderthals I was asleep in my bed. Ooh I thought, how nice, the howling sounds make my bed feel extra cozy.

Then, as I snuggled in my warm bed, my eyes shot open in horror as I realized what was about to happen to my half flat of seedlings outside on nothing sturdier then two milk crates.

One half naked pitch black run outside later, my seedlings were living on top of the washing machine for the night and later day.

Judging my how the milk crates were strewn throughout the garden come dawn on Sunday, I’m really glad I took them inside.

Here’s a quick video I took before heading to work. At work pretty much half the tall plants were knocked over, and we didn’t bother righting them because they’d just get knocked over again. Also our internet was down because of the power outages in Marin, which turned the usually quick process of ringing people up into a molasses like slog.

There were causalities. The corn is basically toast. The ginger mint seedlings are gone. and as you can see, my chile de arbol got hammered. 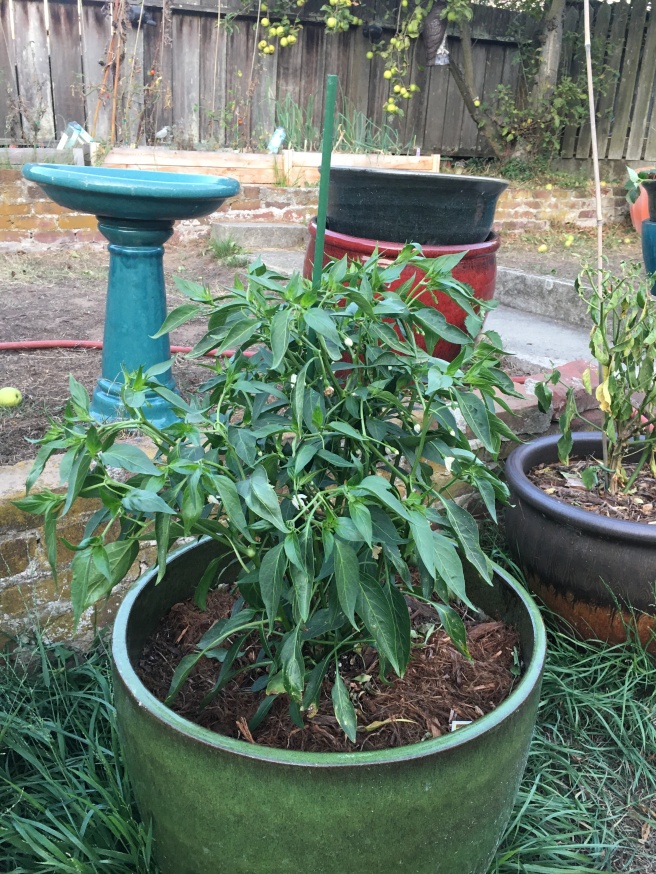 Luckily it’s a pepper plant all it needed was a stake and some love. 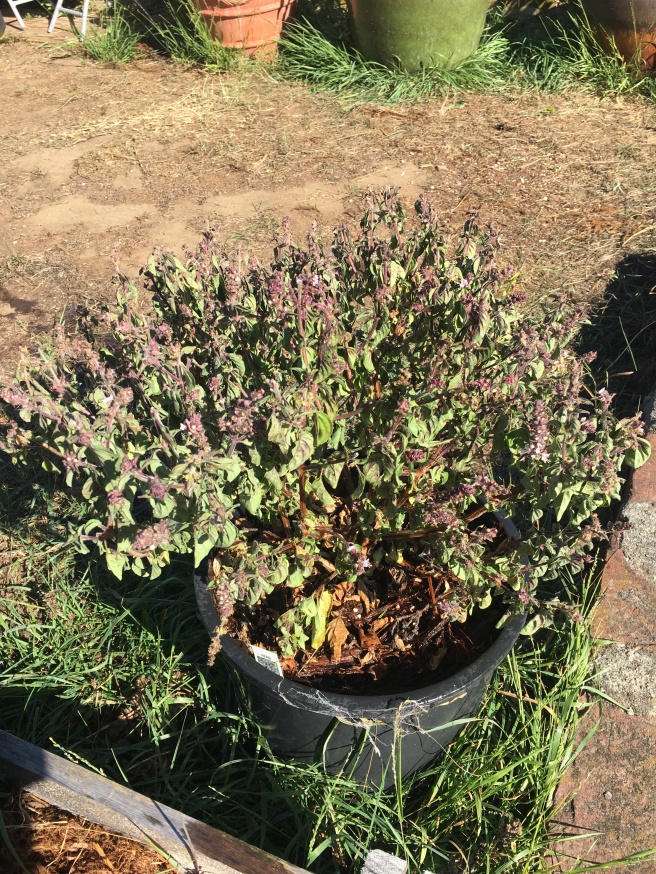 I’m not sure love can save my blue basil though. The winds dried it out to the point that while I’ll make an attempt- coming on the heels of the heat wave makes me suspicious it can be saved.

My pot bush beans also got re-arranged but they’re the type of plant that doesn’t really care.

My tree collard needed re-staking and my parsnips fell over, but all in all it could have been much worse.

After all that, I still have a half-flat worth of plants to plant. And a giant clean-up project.

And I’m going to have to completely re-do the shade herb bed.