So for my 100th post I went all in on Bok Choy, Brassica rapa, a very easy to grow member of the brassica family that I consider one of my all time favorites.

Now it’s time for my 200th post (holy crap) and I thought I’d do a deeper dive into another of my favorite brassicas, kohlrabi. (Brassica oleracea)

This is one that isn’t as well known as bok choy, despite also being ubiquitous at Chinese and other Asian supermarkets.

It’s also very popular in German speaking countries, as it is sometimes called a German Turnip.

Here’s a nice pile of market kohlrabi at my local Chinese supermarket. These are grown much bigger then what stage I pick them at in the garden, largely because they’ll transport and store better at larger sizes. My garden books recommend picking them anywhere from golfball size to tennis ball size. If all you can get is the big guys,that’s fine! The big guys just need more cooking- but if you want little tender kohlrabi you can eat raw, growing them yourself is the best way.

They’re most often found in purple and green varieties, with some seed packets containing a mix of both. Like most Brassicas, growing from seed is fairly easy, but if you want more variety buying starts is a good idea. 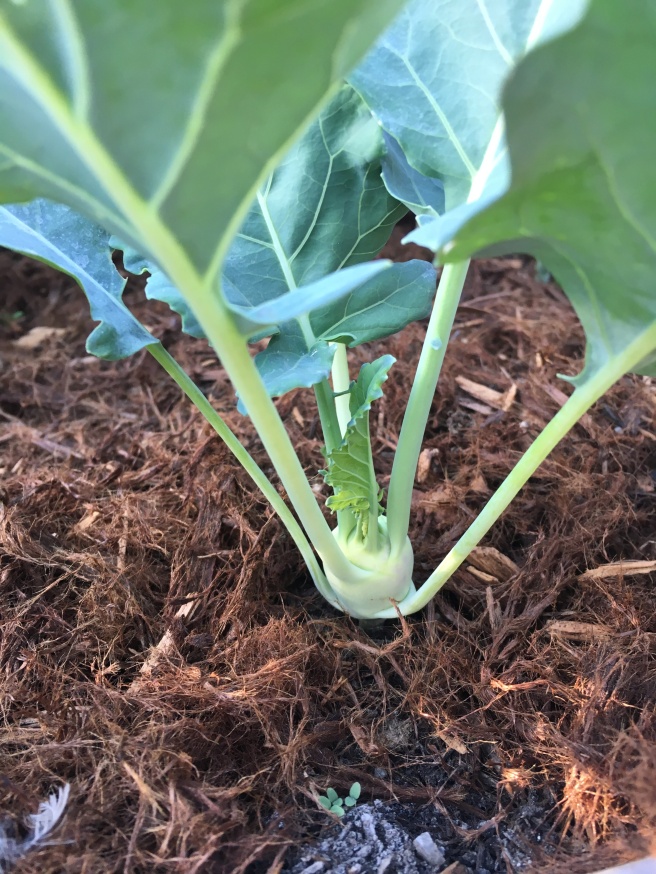 To give you and idea of how fast they grow, here’s a photo of one of my earlier planted kohlrabi, taken around October 12th.

And here is the same plant on the 24th.

They may have been called the German Turnip in the past, but the true turnip is rapa, while the kohlrabi is oleracea, the same species as broccoli, cabbage and cauliflower, among many others.

The edible part is the swollen stem right above the root, so since it’s not the actual root you’ll be eating, cabbage fly, my eternal nemesis, is less of a problem.

I like them raw, but sautéd kohlrabi is tasty too. When they’re very young you can forgo peeling, but any larger then a tennis ball I’d recommend it.

I’m probably going to put in more as the season goes on, it’s a really nice winter crop.

I even have another 6 pack in my latest haul, but there’s been a complication. In true San Francisco fashion, the weather has been insane. After some chill and fog and wet, which is causing an absolute ton of mildew- we had two days of intense heat. Like nearly 100 in my neck of the woods. Which meant on the day off I had to plant these guys, they had to stay inside so they wouldn’t wilt.

And I had to water the absolute heck out of everything.

And now today, it’s foggy and cool and moist.

October in San Francisco is a special time.

I can’t believe this nothing blog has 200 posts! I can’t believe people read about an amateur vegetable gardener in the wildest weather place in the world! But I love you guys and I’m glad you’re here as I shout into the void about kohlrabi.

Though even if you weren’t here I’d still shout into the void about kohlrabi.

3 thoughts on “Kohlrabi not rapa- but oleracea, still all Latin to me.”