Well it’s been busy and it’s going to get busier.

That my friends, is a baby pumpkin! It looks like October pumpkins might be a thing. Or August pumpkins if I’m lucky.

The vine is… going the wrong way. But who am I to tell a pumpkin vine where it can or cannot go. I’m just going to have to accommodate the darn thing as it meanders around my garden. 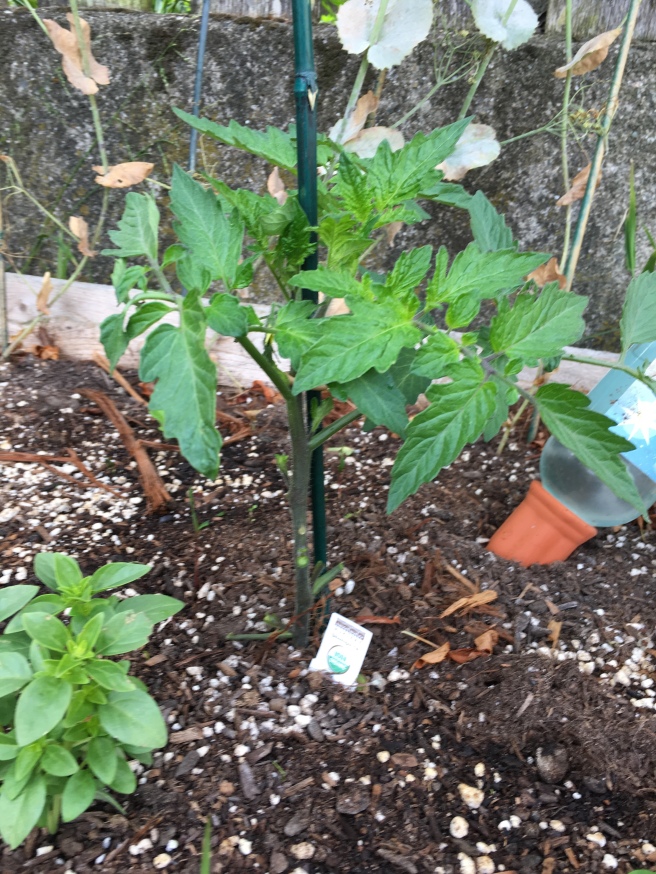 I’m trying not to make the same mistake I made with my big pot tomatoes- and I’m diligently trimming off the bottom stems of the new guys.

The reason this is a problem is what’s happening with the Black Krim.

This is a beautiful baby tomato- and it’s on a sucker stem. So I am concerned that the weight of the growing fruit is going to knock off the whole branch and lose me a bunch of fruit and flowers. I might have to put a stake in the ground next to the pot and tie that branch to that for support. So it’s going to need a Neanderthal level Gerry-rig, but it is what it is.

Lastly- my one big Roma is ripening nicely. It’s been cool-ish, but on the warm side of cool-ish, and this baby tomato lived through the heat wave so it looks quite nice.

And more ladybug larvae are makes their little cocoons so I’m about to have more voracious aphid killers- which suits me just fine. 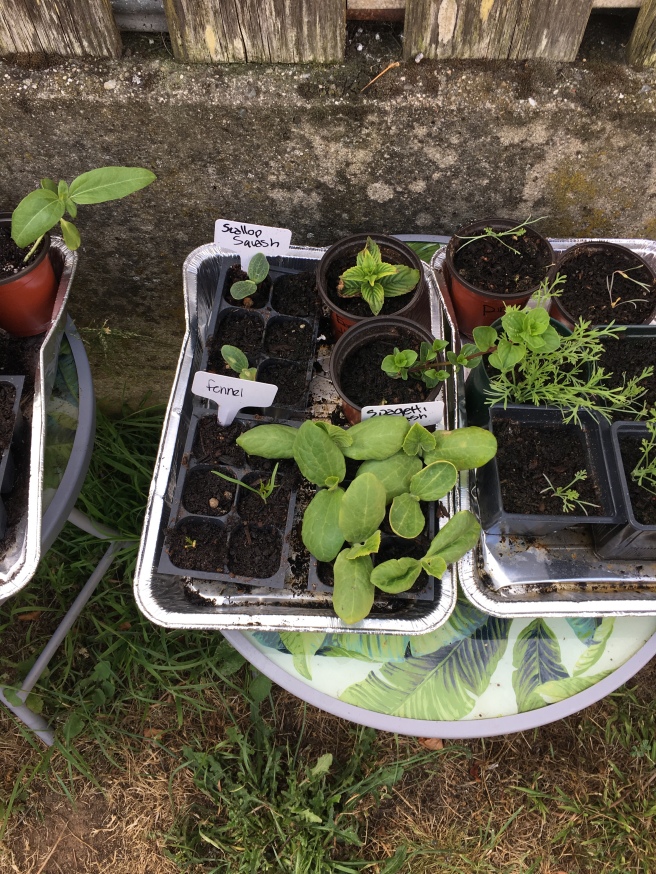 It turned out way more spaghetti squash germinated then I needed- so I hope some of my friends want some seedlings. Only a couple of the scallop squashes came up, but I only wanted a couple of them anyways.

This is some lovely oak leaf lettuce that has been patiently awaiting harvest.

Oak leaf is a good choice for warmer climes as it doesn’t get that bitter in warmer weather. The seed packet I got was a mix of red and green oak leaf- and the one that turned up red has not been growing as well as the green. But that’s sometimes the case- red varieties of any vegetable don’t photosynthesize as well as their green counterparts.

The blue lake beans are quite vigorous- here’s one that has escaped its trellis and is starting up the cucumber trellis. Which reminds me- my next day off I have a real project on my hands tying up the cucumbers- they’ve gotten real messy.

But they have lots of little flowers and baby cucumbers so I’ve got that going for me. 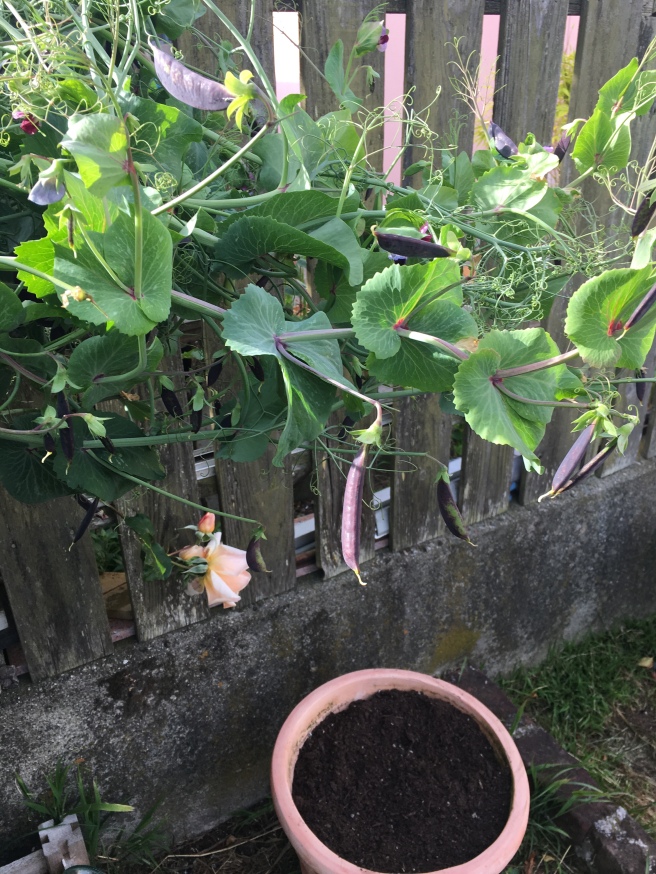 Speaking of trellis failures my purple peas are so vigorous- and so top heavy, that they’ve sort of half fallen over the color bed. They’re still producing- I keep bringing up snap peas for dad to munch on, it’s just very precarious. I expect I’ll get peas into August- the vine is just going to be a bit of a mess.

Still have some leeks growing. Also, as evidenced by the soil, still have some very frustrated gophers. Ha ha you rodent bastards- all my plants are in raised beds and pots! I’m an evolved hominid, I can outthink you furry jerks!

Not all my animal visitors are feral cats and hungry rodents. Some are quite welcome. This is a California Towhee. They’re prolific grub hunters. They were chased out of the garden by the cats- but I haven’t seen my feline friends lately, and the birds have returned. 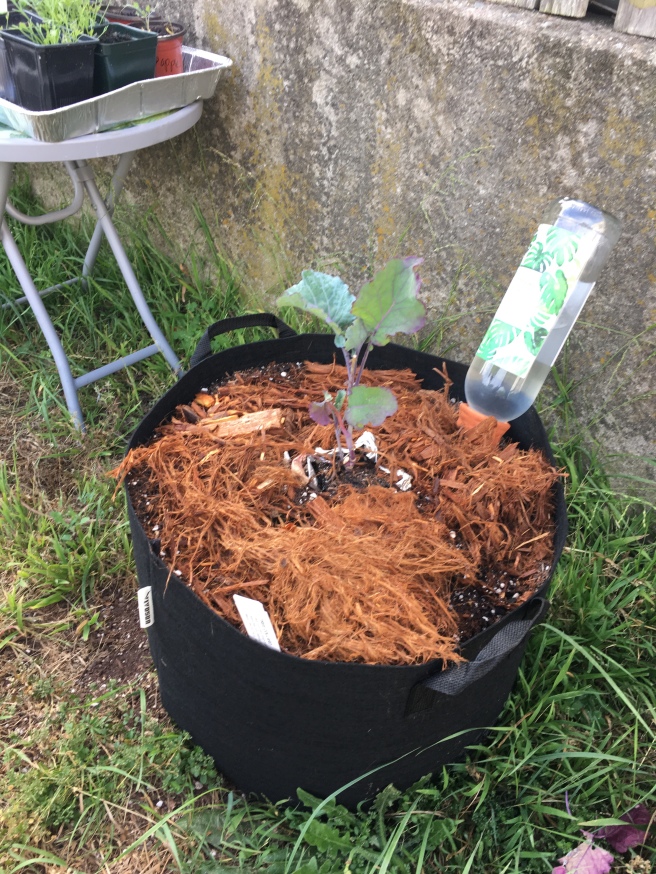 I don’t believe my tree collard is going to make it. It could very well be that my “ingenious” solution to the cabbage maggot problem was the collard’s downfall. Surprise! Aluminum foil rings around the tops of roots probably don’t allow for good root growth. I’m going to try to cut out the foil and use some root growth fertilizer as a last attempt but I’m not too hopeful. Turns out you can’t collar a collard.

Oh god that pun was terrible I’m so sorry.

Here’s a bit of cock-eyed optimism to make up for that pun. 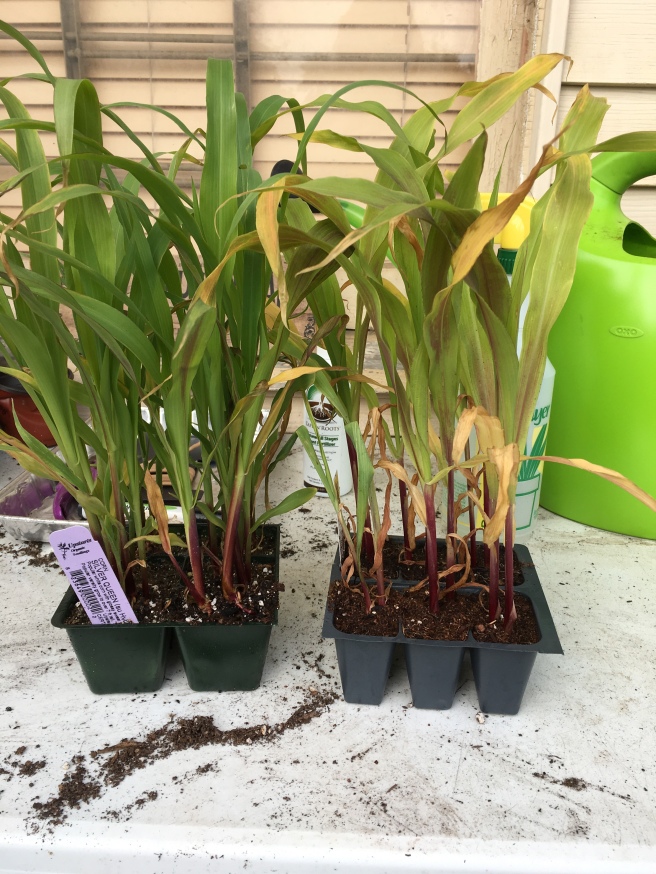 I bought some sweet corn.

Now my parents grew corn when I was a child- it can be done. I’m anticipating a hot summer and fall…

It’s a lot of shoulds.

But I’m gonna do it!

I told you it was going to get busier!