So a little context to the madness that was today. Anyways, today I had a task to do. Besides the task of watering everything that disagreed with the heat- my task was to harvest all the viable tomatoes, and then rip out the plants in pots.

Because just look at them! 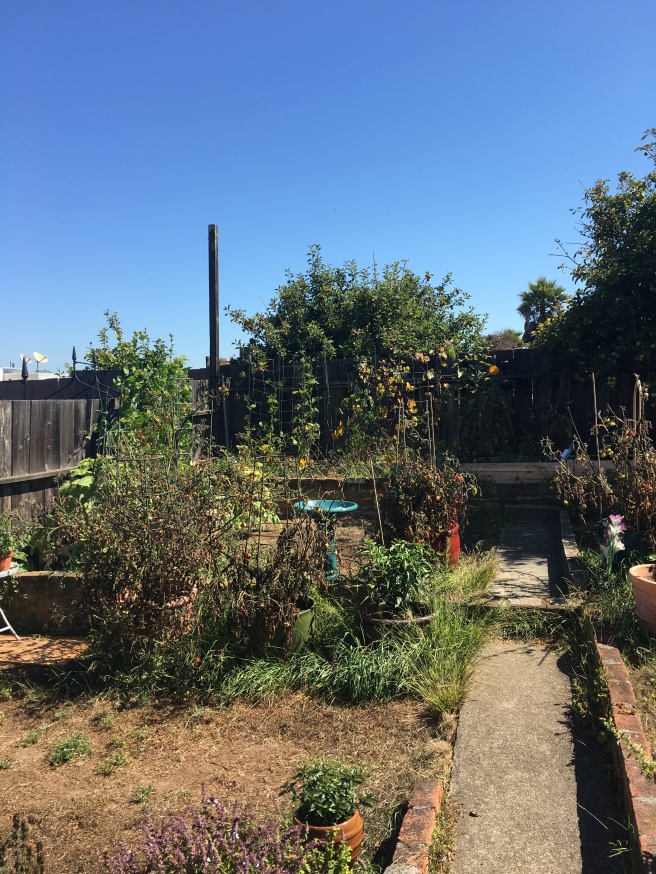 First things first I had to pick the good ones. 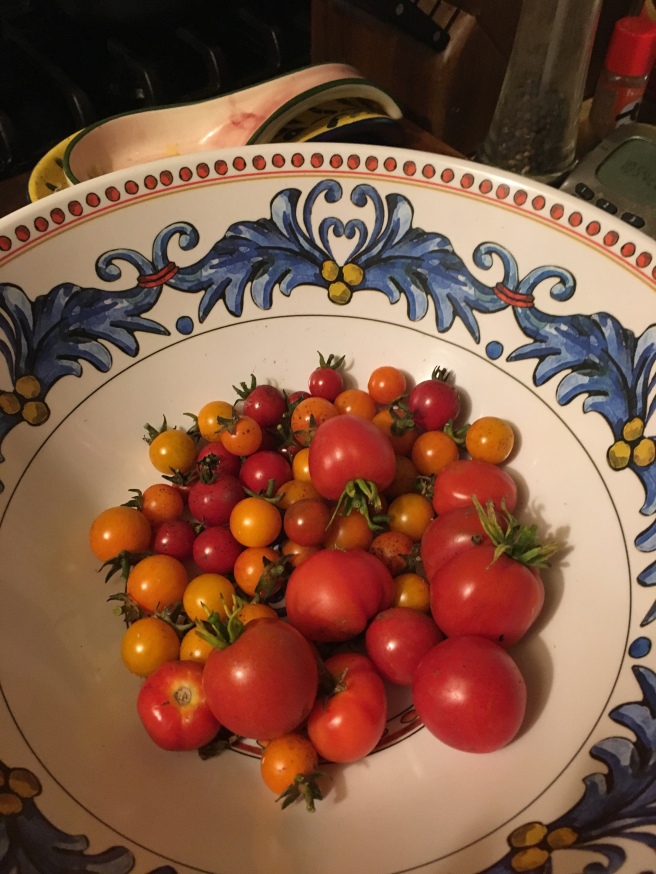 Eh not bad. You’ll note how many of those were sungolds, I’ll get back to that.

So my first victim was the Black Krim, which gave me a handful of really nice tomatoes, before succumbing to the damp. Will grow next year for sure- but in a bed. I had to chip away at the soil in the root ball to try to save as much dirt as I could, as I intend to use these pots as soon as possible. (No wasted space in my garden!) Still, I encountered another problem. 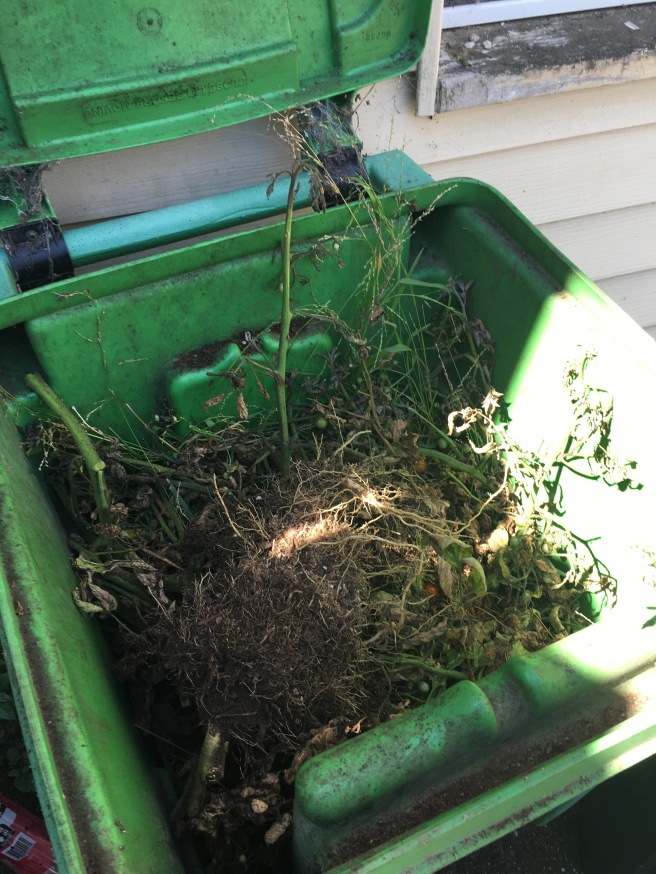 That’s a very full compost bin. I realized at this point I only had room for two dead tomatoes in my green can. So the tomato tear out has become a multi-week affair. 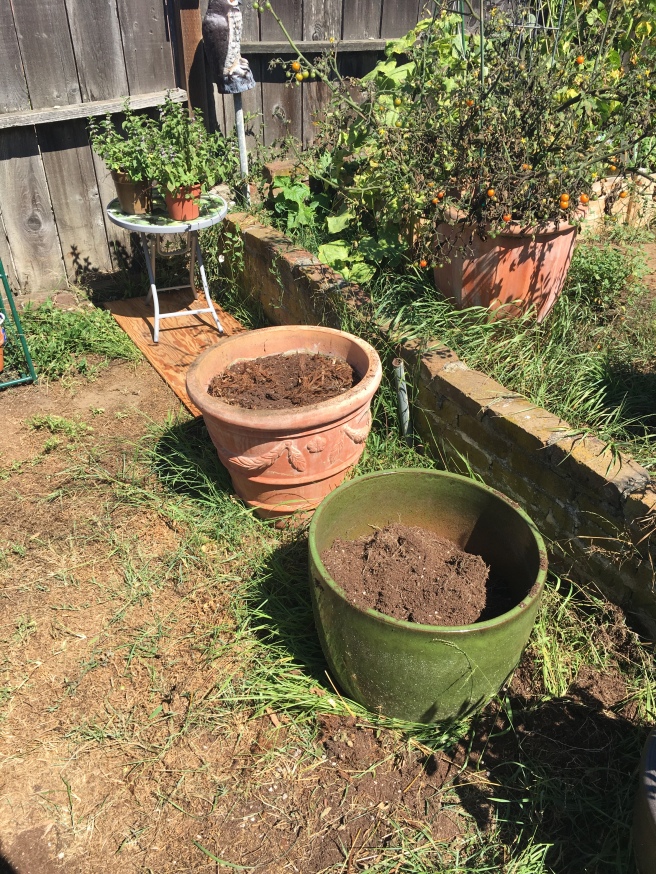 So that’s a defunct Black Krim and a defunct sweet100 down, two to go. 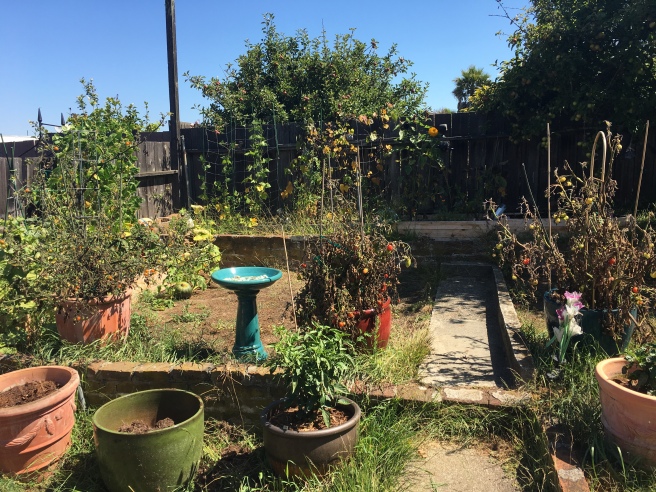 I’ll have to rip out the Fog and the Roma either tomorrow or next week. 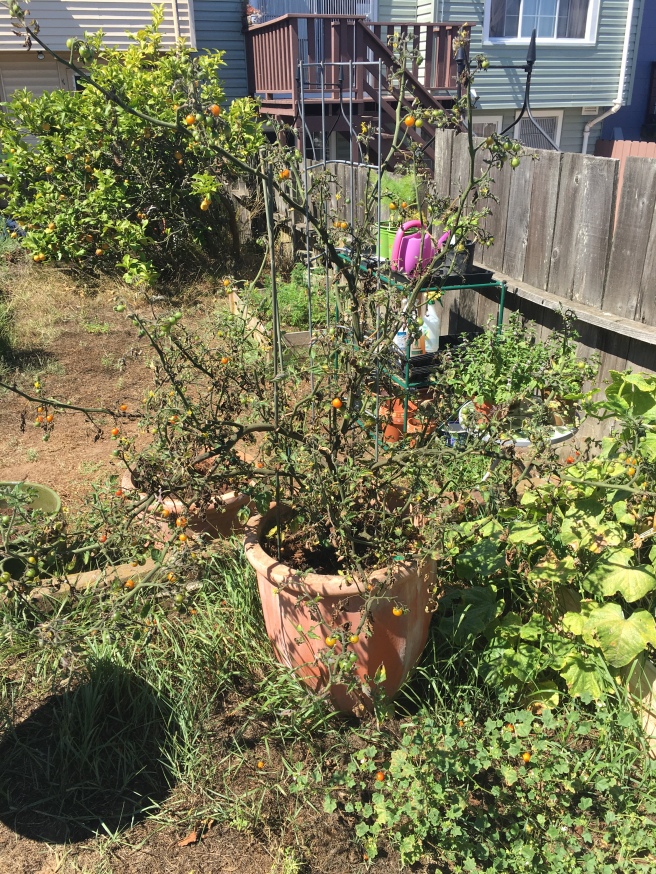 I’m going to make one last attempt to save the sungold. It’s just such a nice tasting tomato- and even through everything, the aphids and the weather- it stayed producing. maybe if I try to tie it up better? Maybe if I aggressively trim it? I’m going to make at least an attempt. I watered it well in today’s heat, and I’ll try to hit it with a little fertilizer tomorrow. Where there’s life, there’s hope!

But it’s not all doom and gloom in tomato-land.

These tomatoes are doing great. On the left is my lemon boy, and on the right is my “dancing with smurfs”, and because they’re in a well draining bed with afternoon sun, they’re thriving where the pot tomatoes are not.

So it’s not that I’m cursed- it’s just that once again, San Francisco weather is inconsistent and capricious and can hurt you as much as it helps you.

And maybe if I’m a little dizzy today it’s because ripping out tomato plants in 85 degree weather at 11 am is just about the craziest thing I’ve done all year.

Time to drink my weight in water and pass out in front of mom’s air conditioner.

After I eat some tomatoes of course!

3 thoughts on “Tomato tear out”