It’s been a bit of a week. Bit of two weeks really, the increase in temperature and sun has been a boon for the tomatoes and maybe not a boon for some other things.

First the sun gold. It’s huge! And it’s still growing which is phenomenal! I’m not falling into last year’s trap of overwatering so by being sparing with water but unsparing with maxsea I seem to have hit upon the right formula for cherry tomato nirvana.

Of course unleashing ladybug larvae on the plant seems to have helped. I still find the occasional red aphid on the plant but it’s clearly a lone survivor easily snuffed out by a squish.

I’m spotting ladybug larvae all around the garden, including nestled in my sage.

Aphids generally don’t attack sage, but other pests can, so go and be hungry my larvae friend!

I’m not so great larvae news, the cabbage fly maggots have definitely attacked the roots of the cauliflower. I killed a bunch yesterday and thankfully today they were nowhere to be found. So either they’ve turned into pernicious flies- or between squishing and spraying I got them.

As you can see the cauliflower looks fairly healthy regardless- but some of the underleaves look very rough, and clearly the root nibbles were not good for the plant. I’m giving them a little extra fertilizer and hopefully they’ll rebound. Cabbage fly is an awful pest but much more deadly to root brassicas than leaf brassicas- especially a cauliflower of this size that’s well developed.

That being said I have baby romanesco all over the garden and I’m going to have to be very diligent in checking their roots for eggs. In a baby leaf brassica cabbage fly can be fatal.

Speaking of baby cabbages, the new shade fabric bed filled with brassicas and lettuce is starting to sprout. I sowed the bed in a frenzy and didn’t write down what was what… but I think I sowed tokyo market turnips and komatsuna closer to the fence along with radishes and mizuna- and then lettuces and arugula closer to the path. I think. The point is it looks like it’s all coming up so go shade bed! 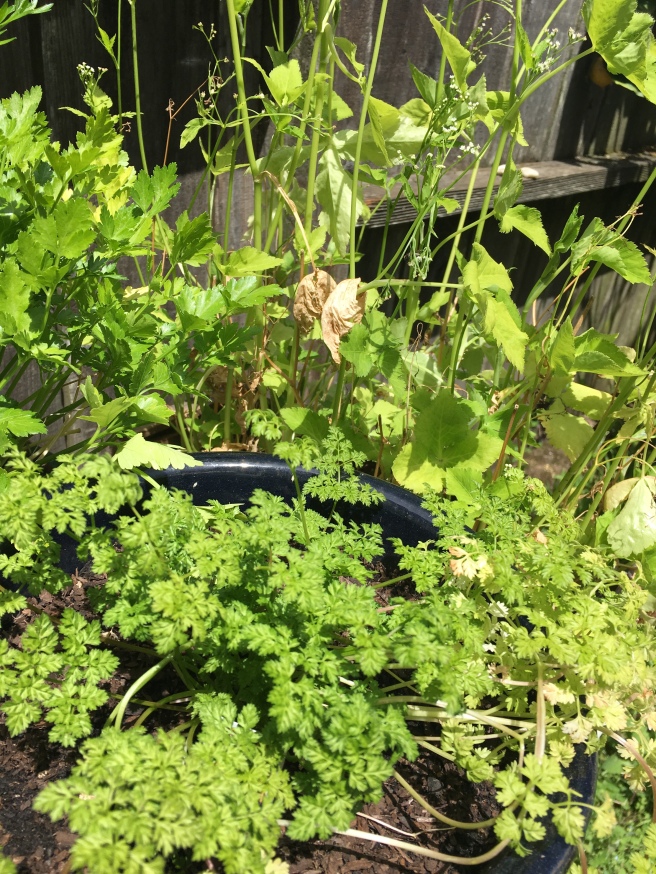 My new potted chervil is doing well- it looks like chervil is more of a pot herb then a bed herb. You can see the little fronds on top, that’s fresh growth, a sign that the chervil likes its new moist shady spot.

As you can see they’re quite vigorous. I’m also attempting to grow some thyme from cuttings, jury’s out on that one. Cuttings are a crapshoot- like 60% just don’t take. But with a little surestart and some love some will- and then you can multiply your plants. This is especially useful in plants like mint and thyme which can be used as borders or ground cover- expensive to buy all the plants you need to cover such a space- much cheaper to take care of a few vigorous specimens and over the course of a few months take cutting after cutting until you have enough for your needs.

I wish my chives were doing better. There’s a very un-chive like sprout in the garlic chive pot which makes me think weed, and the regular chives are barely growing. Are they getting too much sun? Should I have sowed more thickly? I just really want some dang garlic chives! Back to the drawing board I figure. 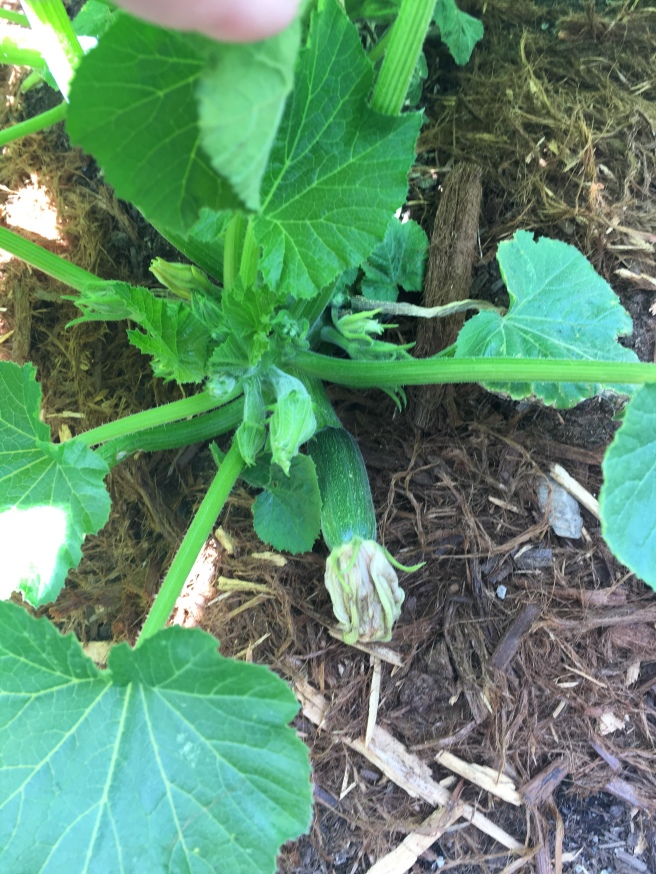 The monster squash is growing squash! We picked our first zucchini yesterday and there will be more in the coming days. I suspect much more.

And of course there’s my other zucchini plants in the back which are growing well when the feral cats aren’t sitting on them. I suspect they’ll be too spiky for cat butts soon anyways.

The beans sowed from seed in the back- Kentucky Wonders- are growing nice. They’re mulched and one or two of the Swiss chard seeds have sprouted in front, but they’re too small to mulch. Swiss chard can get huge when planted with beans, due to the nitrogen fixing so fingers crossed. In a week I’ll put up the trellis for these guys- have to check to see if I have enough stakes of the proper size though. 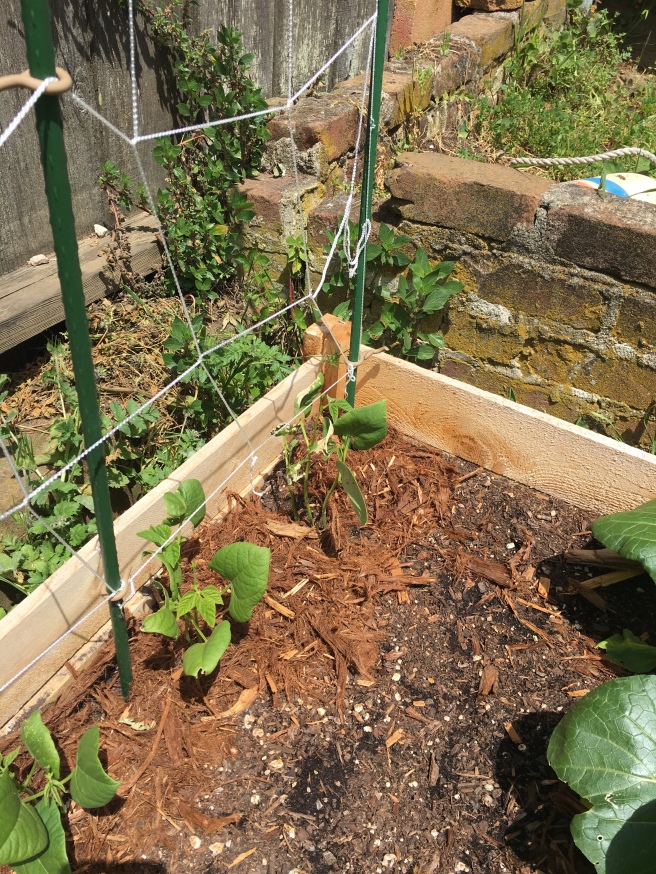 I have concerns about the blue lake pole bean starts though. Some have been just eaten up and are wilting badly, while others are vigorous and putting out new growth.

I had good luck with the haricot vert starts last year and I’m sad those weren’t available but I’ve staggered my pole beans well so I should get a good harvest. Not to mention if the trionfo violetto give harvest early enough I might be able to take advantage of our Indian summers in September/August and plant some late season harvest green beans. After all the soil temp requirements for germination are separate from the growing temperature requirements and as long as we don’t get any frosts I might get some winter beans. 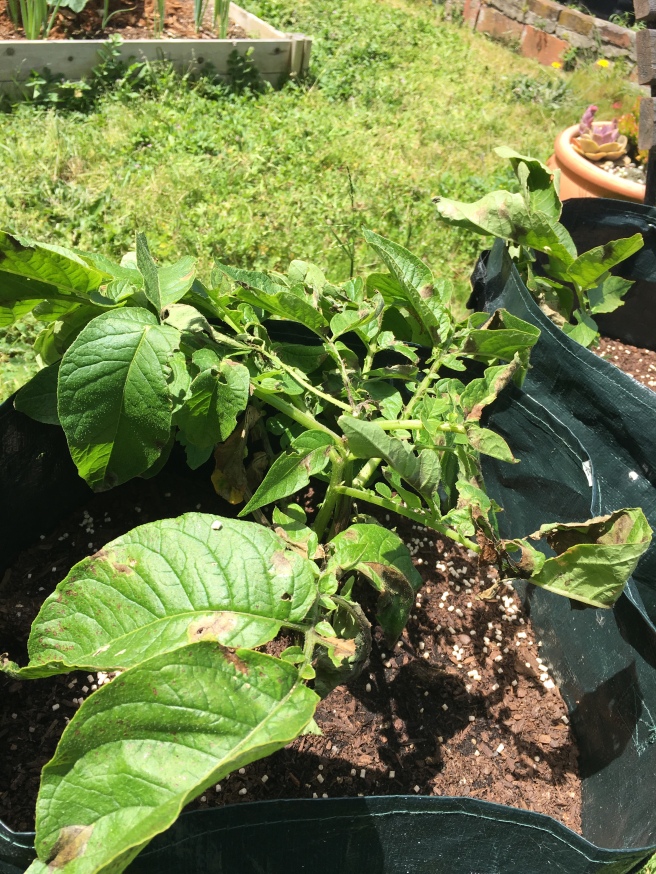 Luckily my younger potatoes are growing great- it’s gonna be time to put extra soil in those bags soon. This might be the crucial difference between proper seed potato and just chucking supermarket potatoes in a bag though. It could be the sulfur dip I put on my supermarket potatoes wasn’t enough and that’s why it’s acting up. We’ll see anyways.

I re-staked the San Francisco fog, as the v-shaped bean trellis was not right for this tomato the way it was right for the sun gold. It’s just a hoop and two free standing stake and I’ve used soft ties to lift some leaves off the soil. Not fancy but it works.

I’ll leave you with some magnificent chamomile ready for harvest. The ease with which I’ve grown this is pretty astonishing. Just put the plant in and away it went! I’m looking forward to tea.