It’s been sunny and clear for several days thankfully, and it will continue to be clear for a while yet. (Fingers crossed!)

Unfortunately while it has stopped raining, it has not stopped wind-ing. 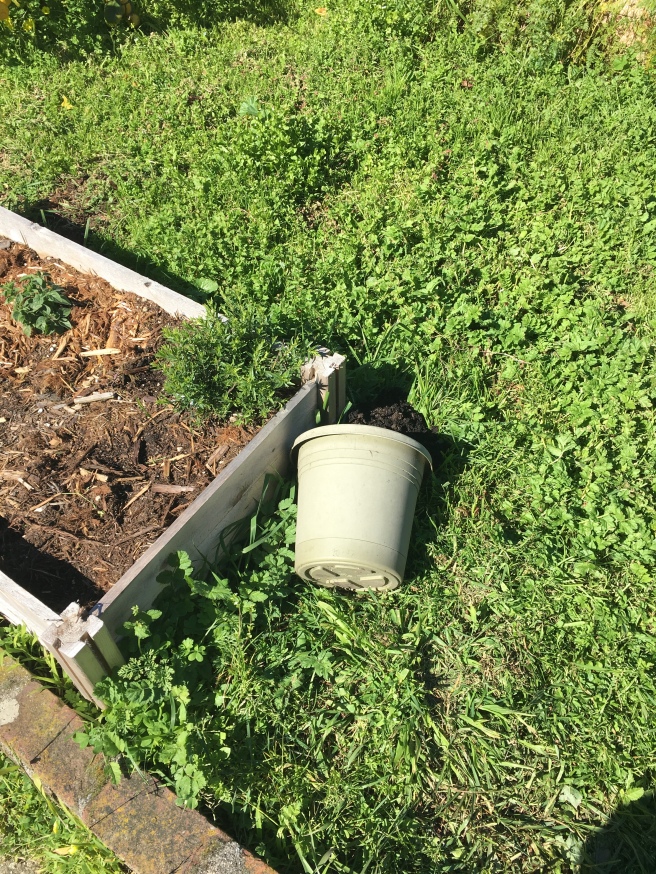 Ha ha oops. There goes the garlic chives! My fault for using that old plastic pot I guess- I had gambled that the weight of the soil would be enough but apparently it was not!

Well that’s the advantage of seed packets- I had plenty more. But I scooped the soil into a new heavy pottery pot and re-sowed.

There’s a reason I prefer the larger terra-cotta and glazed clay pots, it’s partially an aesthetic thing of course but it’s also because the backyard can be really really windy. Weighty pots are safer.

Owl down! Owl down!

The other problem is that the clear sunny skies are drying out the soil really quick, despite the fact that a week ago it was practically flooding.

But there’s an easy solution for that- mulch!

There’s my leeks, all lovingly swaddled with redwood bark. I also mulched the romaine and the green onions in the 4×4 bed.

Now there are only a few green onions that sprouted largely because of how wet and cold it was, so I decided to put up a few more for later transplant.

If I just keep putting out more scallions in the seedling cells I’ll have plenty to transplant all over the garden.

It’s fairly easy to tuck scallions wherever you have space for them, they’re super skinny and you don’t even need to thin them as long as you space them right. Dad eats a lot of green onions so I’d really like to grow a ton of them. So I guess every week or so I’ll put 12 more seeds out. Accounting for a few dud seeds I should have plenty in the ground by late April.