It’s always time for a captain’s log when the weather is unseasonable. Today it reached a high of 81 around 1 pm. It is November 1st. God bless San Francisco, never change. 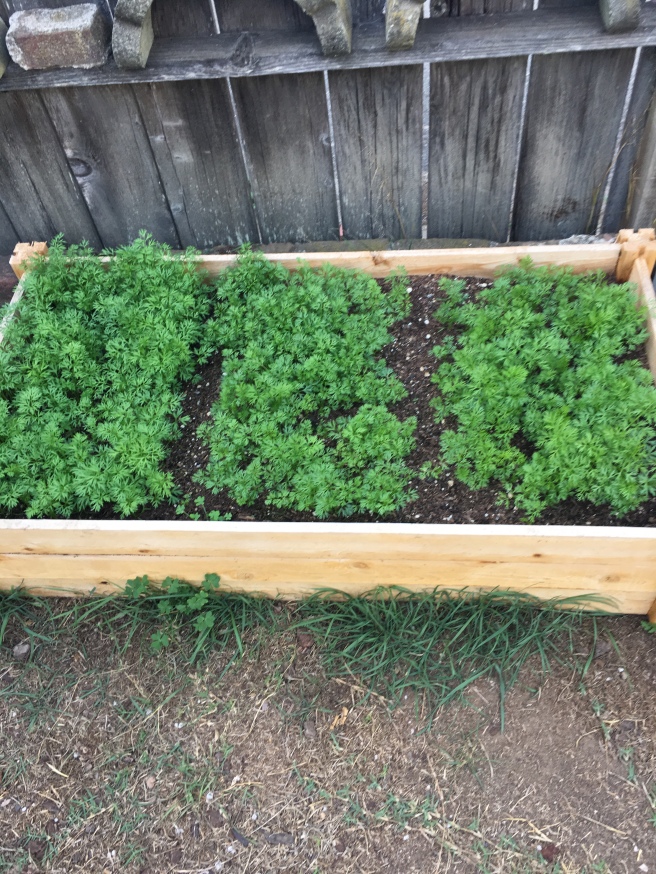 Tomorrow when the weather isn’t quite so melting for a delicate hominid as myself, I have a few tasks. Chief among them is to thin the carrots. As you can see they’re really bushy- they’ve grown really quickly, proving everything I’ve read about growing carrots from seed is incorrect and it is in fact quite easy- if you do things correctly. 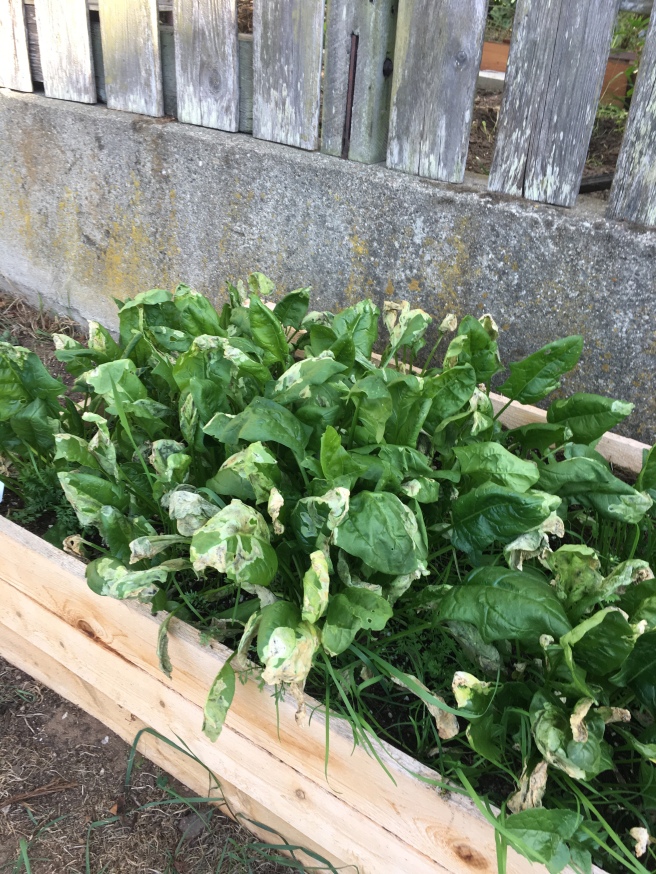 The other major task for tomorrow is to try to get a handle on the spinach. The erratic heat has really damaged it- I have to definitely remove the heat damaged leaves and harvest the rest, pull the weedy plants (and the outright weeds) and sow some more spinach plants in the bare areas.

A different variety this time, but it looked nice and the Japanese varieties tend to be much more heat resistant. Just looking at what I’ve sowed- the monstrueux variety has done much worse than the alrite Japanese variety- when I did get a baby spinach harvest I got much more out of the alrite. I still have some alrite seeds, but they’re more of a baby variety and I wanted something that would grow a bigger plant for harvest, so when I was in Japantown I got this Okame variety for, well, variety! If I have any advice when it comes to plant variety it’s look outside the western paradigm. Humanity has been growing vegetables worldwide since the dawn of agriculture- and that means there are a lot more types of plants then you get in your typical American seed catalogue. 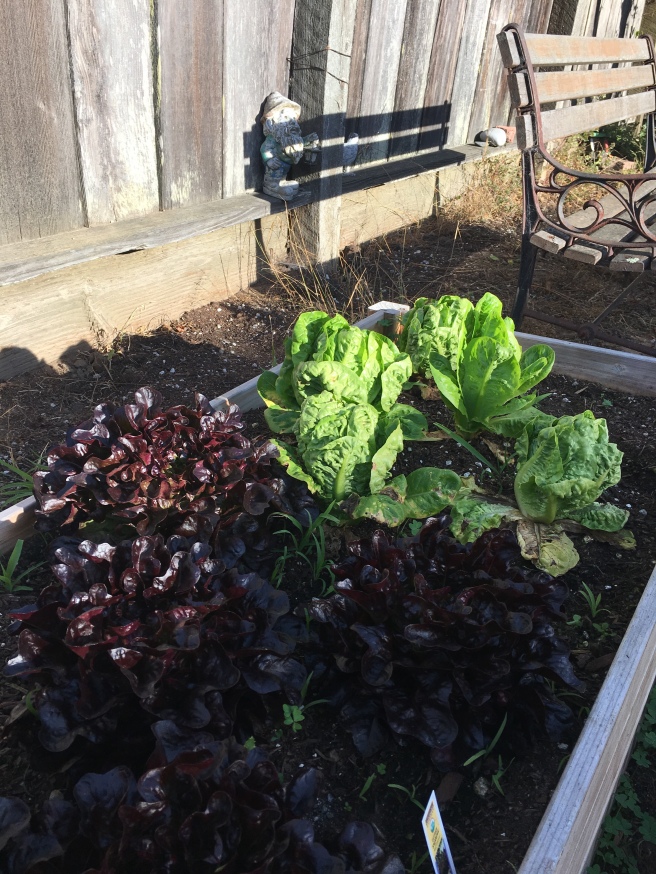 The lettuce is doing well- which is slightly surprising considering the heat wave. This is the advantage of starting from a plant rather than a seed- more heat resistance due to the more established nature of the plant. 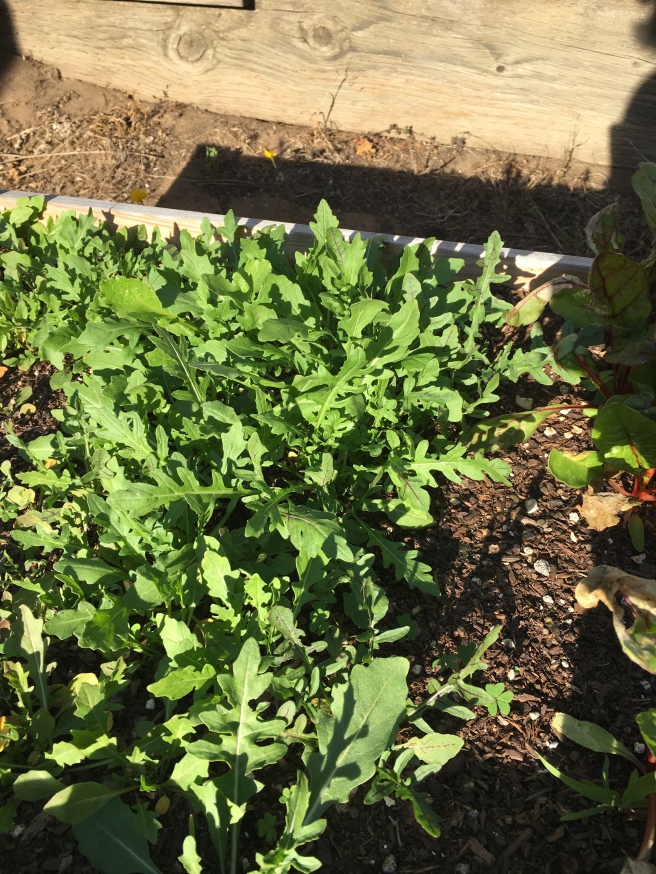 While the Swiss chard is also heat damaged- I’ll have to re-sow a few of those- the arugula is just booming. Arugula is almost like a weed- there is no arugula season, as long as the sun is shining and there’s no ice on the ground, it’s arugula season! It’s become my garden snack, if I’m watering in the back- I’m eating some arugula. not sure I’ll have enough for the table- it’s all going in my mouth! 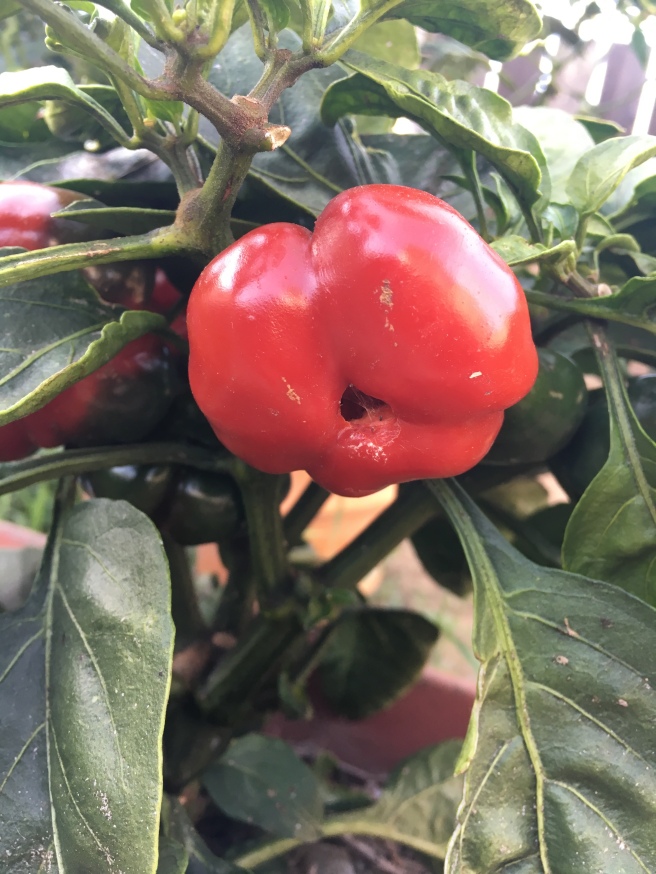 We had a pepper casualty. I was so happy! An all red baby bell pepper ready for harvest! And then I spotted the hole in the bottom… and something moving inside.

I picked it and threw it right into the compost ick ick ick. I also checked all the other almost ripe peppers, and luckily this was the only infested pepper, so I should at least get a few others.

Price of growing plants honestly! 10% of the harvest goes to the bugs! If you’re lucky of course, if you’re unlucky it will be more, but that’s what neem oil is for. 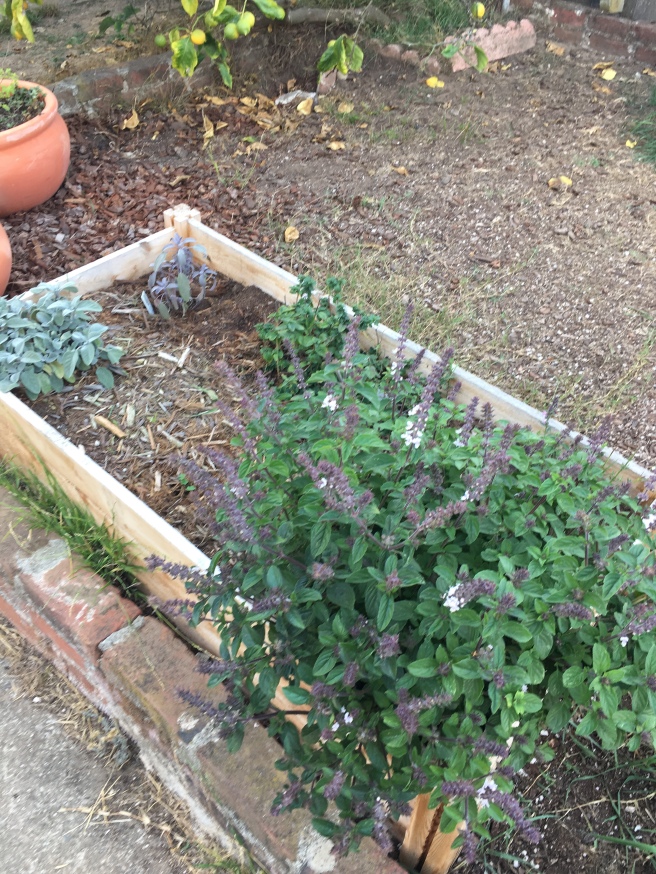 The weird warm weather is causing the basil to sprout flowers again, along with the hyssop. That’s another job for tomorrow- going to have to clip all the flowers so the leaves don’t get bitter.

I’m also going to have to cut back the mint thunderdome, as the top leaves are a little crunchy looking and not as fragrant as the other leaves. The tendril still abides. 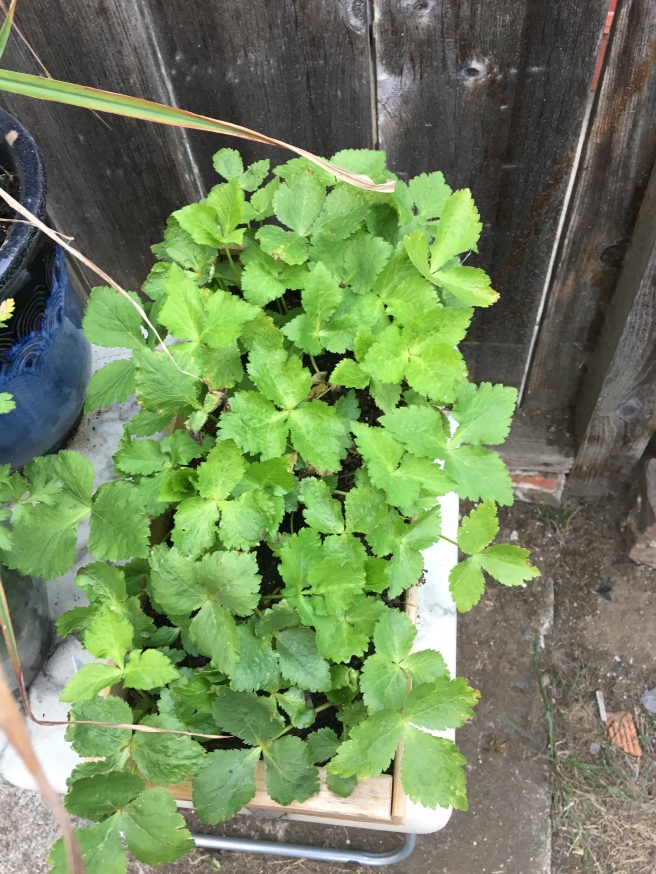 The Mitsuba continues to grow, as do all of my pot herbs. We had either a scale insect or mold issue with the base of the lovage- or rather a scale insect issue that turned into a mold issue- either way, that’s what neem oil is for. The lemongrass is growing like a weed which is nice. 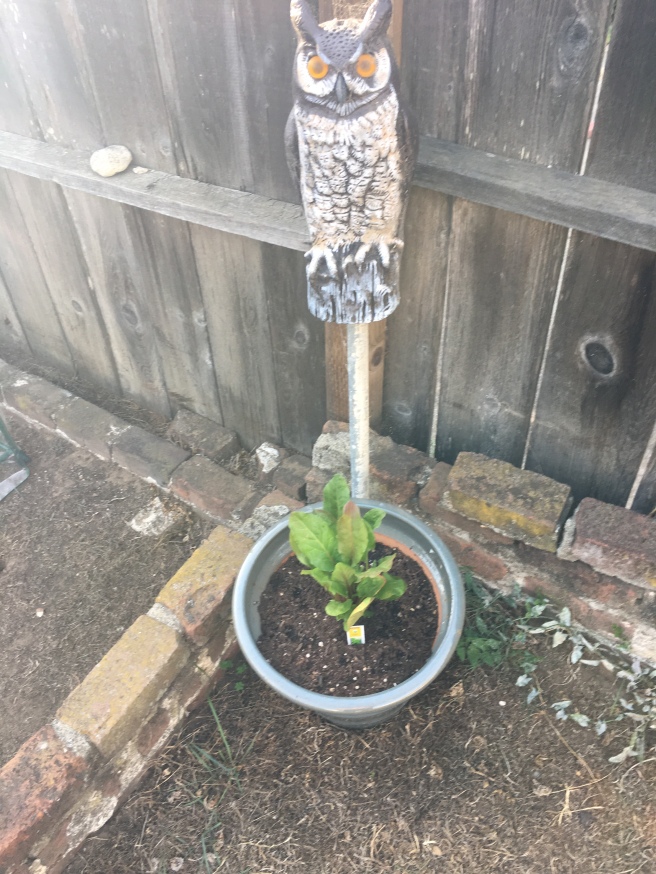 The owl guards the sorrel. The sorrel grows. All is good under the gaze of the owl. 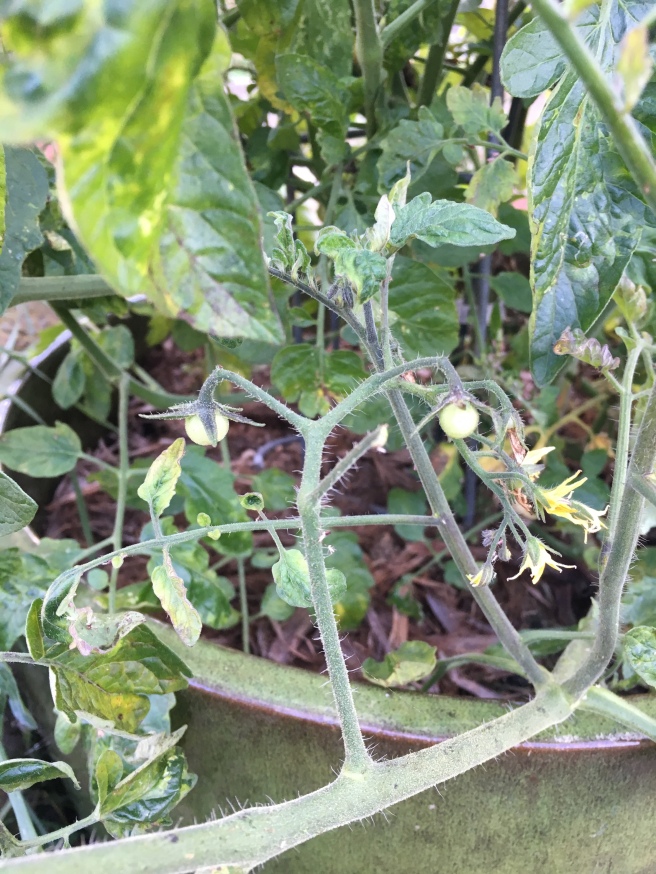 Lastly- those are two baby tomatoes. I have counted 4 total, along with dozens of flowers waiting to turn into tomatoes. IT’S NOVEMBER FIRST!!!

I am staying on top of appropriate watering and tomato fertilization, along with both hand killing the red aphids, and using neem oil when appropriate.

This is nuts. I’m going to get late November early December tomatoes.