This was a long time in the making but I’m super happy about it.

I’ve been having such a great time with the few carrots I’ve grown in pots. So I bought another 2′ by 4′ raised bed, and I found the perfect place for it.

Plenty of space between the lemon tree and the greenhouse bench! And it’s a shadier spot which is good- too much direct sun isn’t so great for carrots.

All you need for assembly is a mallet! Easy peasy!

Once assembled I took Nancy Palmer’s advice and put a layer of wet newspaper down to help control weeds without the horrible hassle of weed barrier. (Thank you very much for the advice Nancy!)

Then it was just a matter of filling the darn thing and planting in it!

I chose three varieties of carrot that I like. 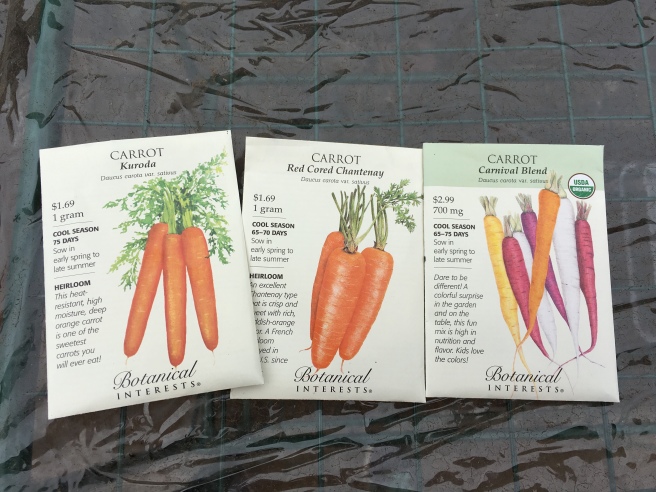 The Kuroda are great long varieties while the red cored Chantenay are nice and plump- and the carnival blend is just fun.

Anyways carrots are actually kinda tricky to grow from seed, so I had to be really careful planting them. First I scattered more seed then I thought I needed in the bed, divided in three areas, maybe a third of each packet. Then you’re supposed to press the seed lightly into the ground and water well.

Problem is- it’s a lot of seed so pressing it all in is more work and bother then I’m willing to do- so instead I scattered a little more potting soil over the top- just a few cup fills after I watered well- then I watered well again.

The reason to do it like this is so the dry soil on top is a different color of the wet soil beneath so it’s easy to tell when you’ve scattered on enough.

The real tricky bit is that carrots don’t sprout for like three weeks plus and they won’t sprout at all if they aren’t nice and moist. Some people cover their carrots while they’re in their sprouting phase but since this bed is in a shady spot I think it’ll be ok.

The other tricky bit is that you have to over-sow and then thin- if they’re too spread apart they won’t grow right- but once they’re bigger if they aren’t thinned far enough apart they’ll grow all scrunched. Carrots are a paradox!

Carrots fresh from your garden are so good- and you can basically grow them everywhere. As long as it isn’t baking or freezing- it’s carrot season.

The smallest little strip of land can support carrots- pots too. You don’t have to buy your soil either- just work your own ground well.

It’ll be a while til I have these carrots, but the ground is the perfect storage medium for a root veggie, just pull what you you need when, and let the ground keep the rest fresh til you need it. There’s a reason carrots are such a staple food in multiple cultures.

Grow carrots! It’s a little bit of effort for not much money and your reward is delicious crisp carrots!