The tomatoes this year are really turning out to have been a good investment in time.

The first tomato- the wildly early one- was rather unwisely put in a large pot. I have found that while potted tomatoes bear fine- they tend to be extra buggy and nasty.

The Petaluma hill purple is no exception- but… 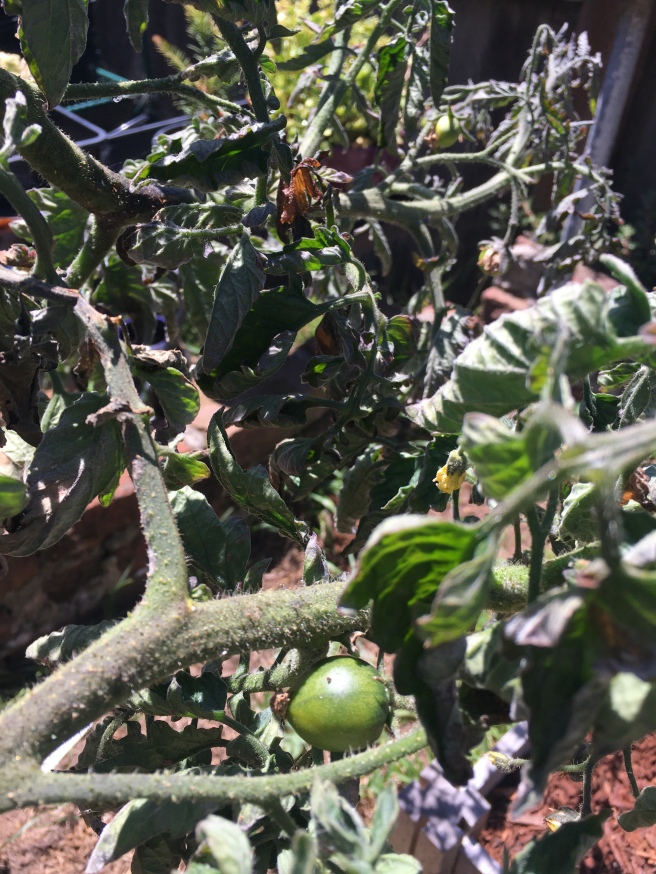 Despite the fact that the ladybug squad is working overtime, and the fact that it clearly has some sort of fungal issue- it’s still fruiting like mad. 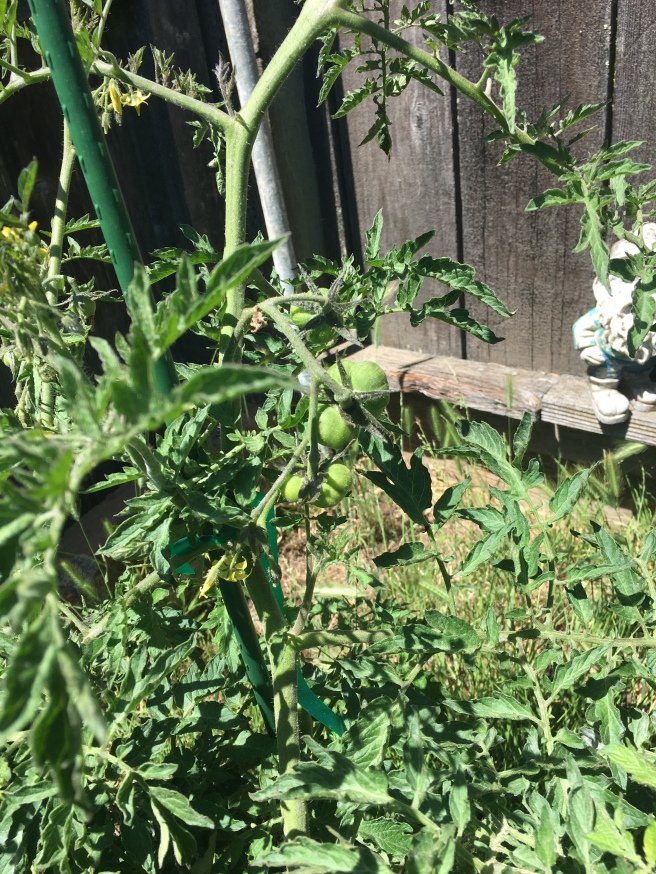 Meanwhile the mess that is Spike is just LOADED with baby fruits. This little weirdo beauty that was marketed as a “Star Trek” tomato is prolific enough already that if they are delicious as advertised I’ll buy 4 plants next year. The proof of course will be in the tasting… also it’s an open-pollinated variety so saving some seed from one of these fruits could be fascinating.

Julia Child is also fruiting, though not as vigorously. It’s fruit is also that sort of classic dimpled heirloom type which is nice to see. 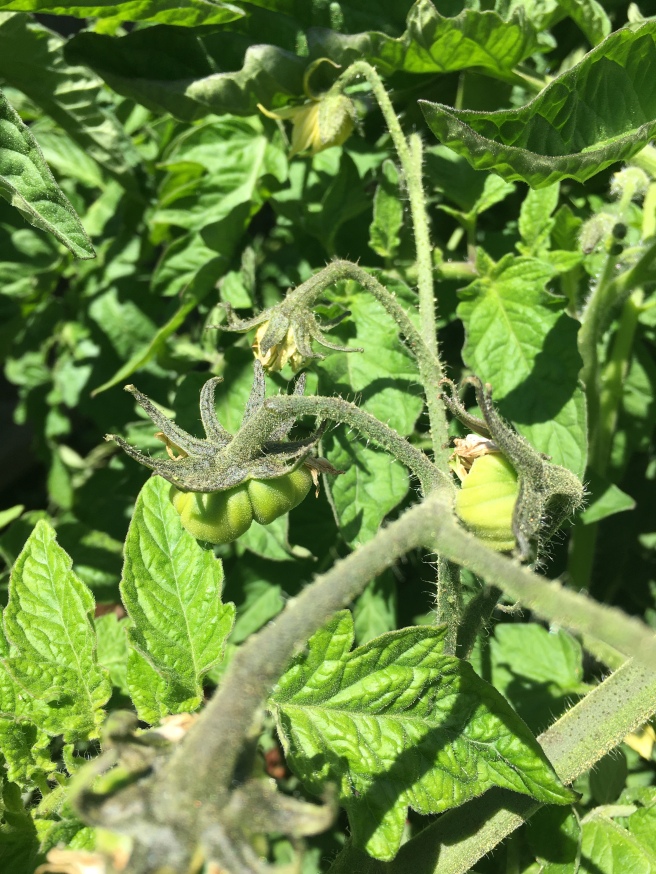 What’s very odd is that the black krims are also fruiting, even though they’re about a month behind the fancier types.

It’s this hot hot weather we’ve been having. Murder on my headaches- amazing for my plants.

Here’s a wide shot of the tomato corner. As you can see my goal of being neat and tidy this year has completely been missed because I have no patience or executive function for pruning or general neatness. As this seems to be working in my favor I will claim it was my plan all along.

It was my plan all along. 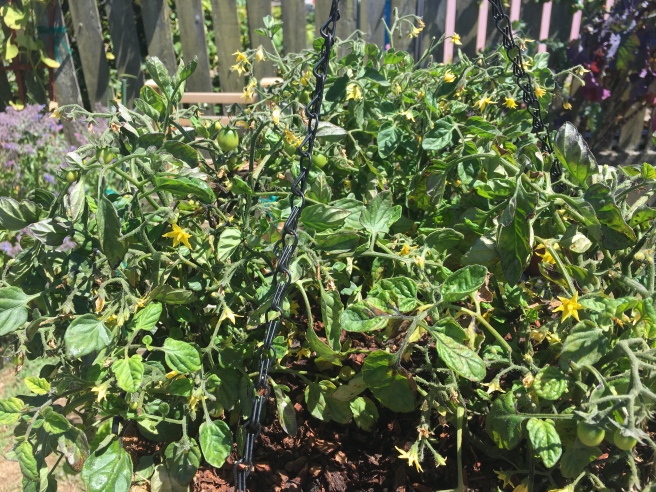 Now the real interesting specimen is the three cherry falls I put in a hanging basket in my funny yard butler.

The breathability of the coir basket seems to have really helped air-pruned the roots, but the plant is getting the same weird semi-fungal issues the potted Petaluma hill purple is getting.

Nothing pruning the worst leaves and spraying with copper fungicide once a week won’t fix, but an issue to keep an eye on. 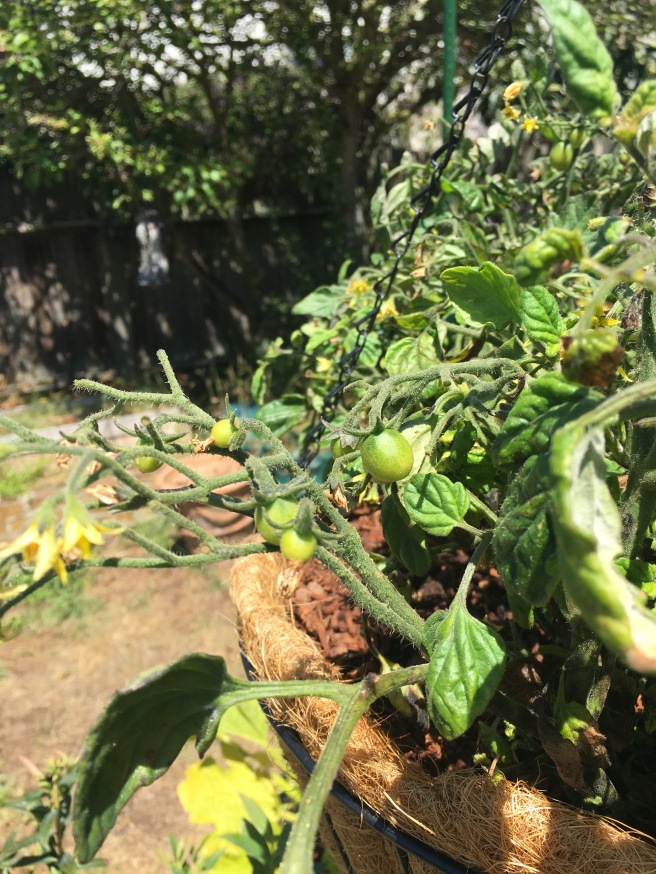 It’s looking like I’m gonna get a ton of cherry tomatoes from this one medium large hanging pot, fungal issues aside. 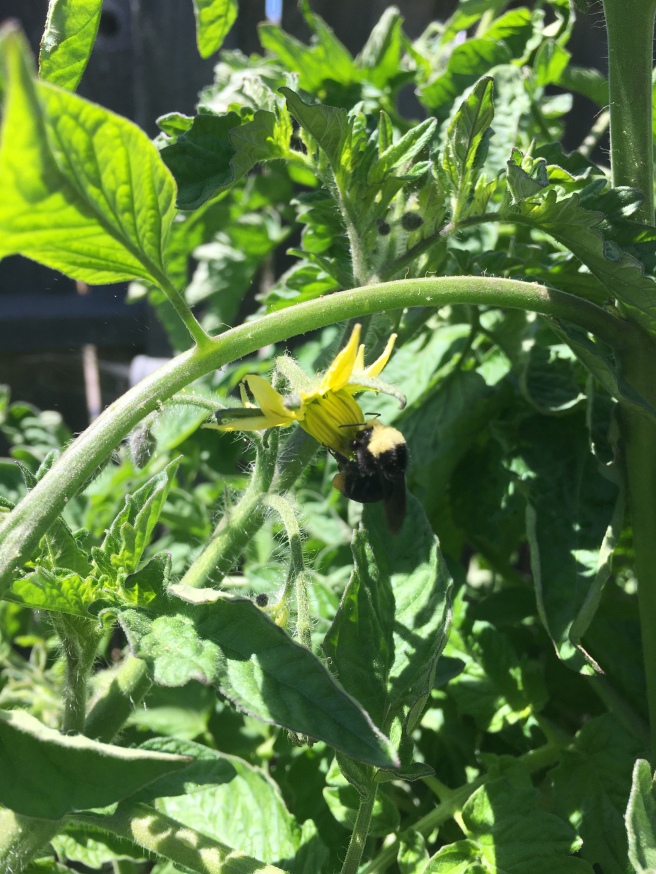 Of course the real MVP this season isn’t the heat or the tomato varieties- it’s the beautiful buzzing bumblebutts that as I was taking close up photos of all these fruits kept buzzing around me in order to get that pollen.

“Excuse me mister but we have some flowers to get to buzz buzz buzz oh yes you can take our picture, let me show you my best side buzz buzz buzz”

I have now about ten photos of this fuzzy lad but this one’s my favorite because you can see their pollen pants and their little antenna.

So the heat and the good soil are being helped along by the buzzing beauties and the end result is that I’m gonna have quite a bit of tomatoes this year, god willing.

Why shouldn’t I or anyone eat *this* tomato once it has ripened?

Because it isn’t a tomato- it’s a potato!

My potato plants are so healthy that after flowering they fruited! Which is a super good sign as to my potato filled future. But, just to make folks aware- all parts of the potato that are not the spud are super duper poisonous! In some parts of the world potato leaves can be eaten, but there’s a method of washing and cooking them repeatedly to take the poison out and unless you know what you’re doing- DON’T.

So alas my pretty little potato fruit is destined for the compost bin with the rest of the leaves once it’s harvest time.

Still pretty cool though- and kudos to the bees!

Really wish it wouldn’t be 81 degrees today- but it seems like there is at least a little bonus to feeling like I’m gonna melt.