The Komatsuna are flowering. Which is very pretty- but signals the end of the road as far as edibility goes.

Some of these pictures were taking in the wee hours of the morning which is affecting the light balance. 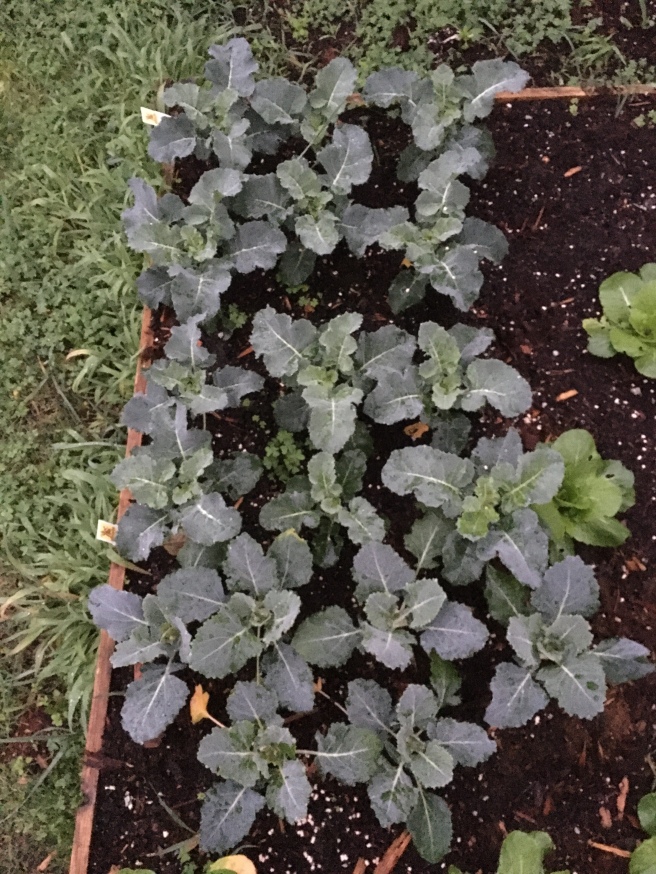 In the notoriously fungus-y 4×4 bed the broccolini and kohlrabi are doing fine. The two extra choy I put in are not though.

The Brussels’s sprouts are a mess.

The purple guys are doing… something weird. It’s like the sprouts are… sprouting? This may not have been the best of experiments.

The shungiku behind the komatsuna is of course, not a brassica. It is however enormous. It occurs to me that the health of this bed may be due to the shungiku, as it is a type of chrysanthemum. If I recall the organic pesticide pyrethrum is synthesized from a type of chrysanthemum- the shungiku might be protecting the bed. That’s… interesting. Might have to get my hands on some shungiku seeds and spread them around the beds that have tomatoes in them later. I also have to give the darn things a nibble and see if I even like them.

Happily the surviving napa cabbages seem to be… surviving. They also need weeding.

The real problem is the corner bed that the cats have been killing. I was really looking forward to celery, but local feline killed those dreams. The kohlrabi isn’t bulb-ing in this bed, and the bok choy is a soggy mess. Time for a reboot as it will be a few months plus before I can stick tomatoes in here.

The rain and drizzle is a real problem. It’s not raining deeply enough to really deeply water everything, but it’s also not warming up in between rains. That’s why the mildew is so bad, because while it’s raining less then last year, it’s also wetter in between rains.

Hopefully it warms up a tad soon!

In the meantime- I have brassicas to eat.