It’s been so long since I’ve gardened year round instead of just having a few summer plants and just keeping the herbs- that a few problems are popping up, some of which I’m familiar with, some of which are a little new to me.

The first is simple.

Some of the leaves are yellow. This is usually either due to a lack of nitrogen or a lack of water. As both plants are well watered, it’s most likely time to fertilize the herbs. No biggie. 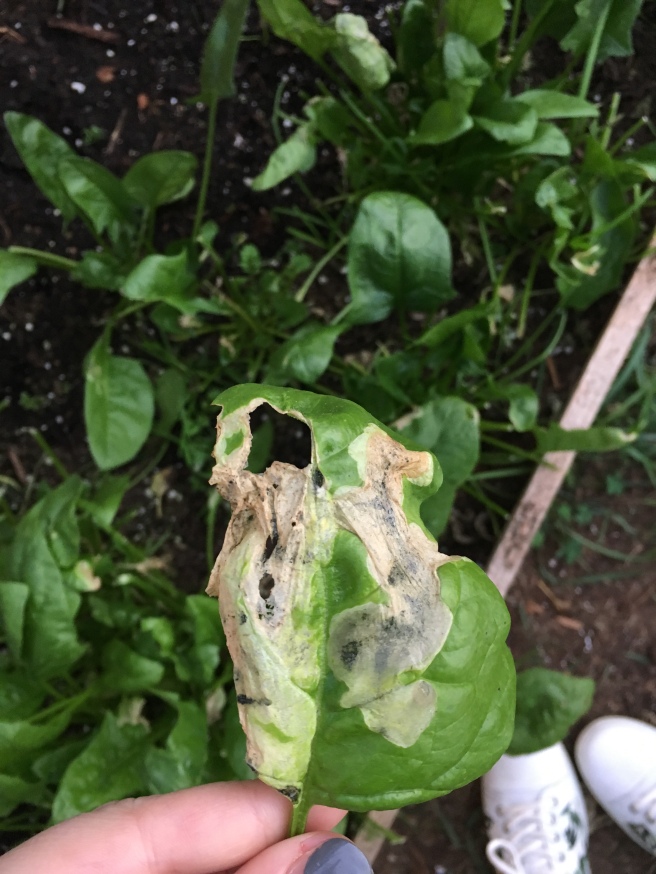 This is bug damage right? Or is it heat damage? I’ve sprayed and left bait and I picked to worst of the leaves but the spinach keeps getting damaged. I grew spinach earlier this year and while one or two leaves got a little chewed it was nothing like this. I’m chalking this up to heat stress/bug stress from the heat and hoping by the time the new spinach/Swiss chard sprouts it’s consistently cooler.

The lettuce is crazy though.

The void is where I had to pull another romaine- because the stem had gone all soft and mushy. Is that a fungal problem? Is there like a grub issue? I’ve checked all the other stems and they seem to be fine, and the red lettuce isn’t bothered. Am I watering too much? Too little? I’m so confused.

As for the tomato:

Yes the tomato plant has little baby tomatoes- but it’s also got curling leaves and leaves with brown and yellow spots.

Basically it got hot enough for a growth spurt- but now it’s getting cold enough that I’m pretty sure the plant is shutting down. I think perennial tomato plant is a pipe dream in San Francisco climate conditions.

I just hope it lives long enough for the dozen or so baby tomatoes to ripen, so I am watering (not too much!) and fertilizing regularly like normal.

Didn’t want this post to be too much of a downer, so here’s a picture of some almost ripe baby bell peppers

And I checked these- no holes!