Ok so that’s a mouthful- and this isn’t so much a recipe as it is a concept, but here we go.

If you grow your own herbs (veggies too- though I used store bought veggies for this batch) a good use for them is to dress up canned tomatoes into a really wonderful jarred sauce for pasta and pizza and meatballs and steak and… pretty much anything you’d put tomato sauce on really.

It’s sort of based on Alton Brown’s good eats tomato sauce in that it’s based on roasting canned tomatoes in the oven and using a stick blender to smooth it out- but over the years I’ve made it, I’ve gone a little far afield.

Those are the veggies I used for this batch- just what was a few days from going bad in the crisper really- all diced fine. I then gathered some herbs from the back-

Oregano- thyme- basil- Tarragon- but whatever you like in tomato sauce is fine.

Some of the herbs I cut fine for later- but most I left whole.

I then took two large cans of diced tomatoes and drained them of excess juice (which I saved) and put the tomatoes, veggies, and whole herbs into a baking sheet. 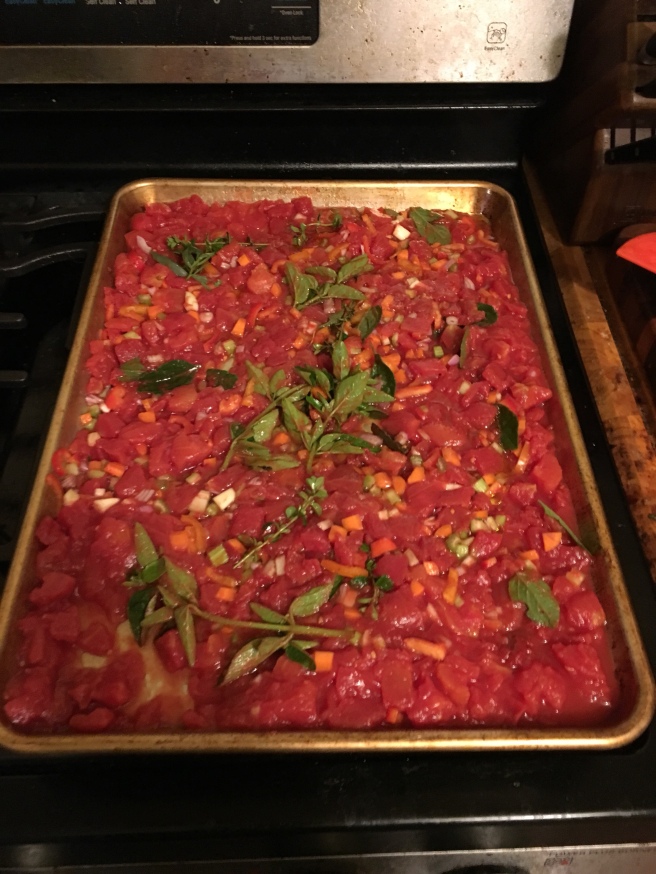 I put a splash of white wine and a drizzle of olive oil on top of that, along with a squeeze of tomato paste- and put it in a 325 degree oven for about an hour- checking on it and stirring every 20 minutes. (Your oven temp and time may vary)

The reserved tomato juice from the can I boiled down in a medium sauce pan until thick and syrupy. I added the diced herbs to that- and once I pulled the pan of roasted goodness from the oven- I put that into the medium sauce pan too.

Now if you like your tomato sauce chunky- it’s done- just make sure to fish out the spent herbs. But I put the stick blender to it: 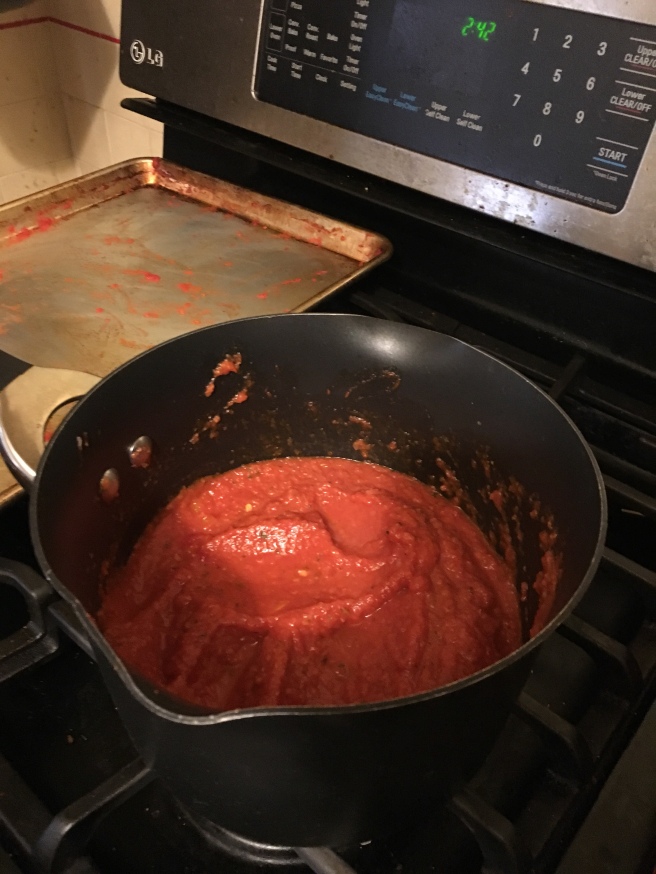 Then I tasted it and salted and peppered it to my taste. Also nice- a little red pepper flake.

Then I put it in the fridge!

Boom. Pantry and fridge clean out herb tomato sauce. I’ve already used the first two jars in this picture, this stuff is good on everything. I braise beef in it, put it on pizza and pasta- it’s very nice. Like I said, not really a recipe more a bastardized technique. I’ve made it with onions instead of shallots, no celery but twice the carrots- yes garlic and no garlic… The peppers were a nice touch this time. Sometimes the cans aren’t too juicy so I skip the straining step- sometimes I put a splash of vinegar instead of white wine- sometimes I use a splash of red wine… you get the picture.

And for sure when I have more of a carrot harvest most of the carrots would be from the garden instead of store-bought. Same with everything really. Except the tomatoes. This kind of tomato sauce is just better from canned tomatoes. Now- you could can your own. But seeing as I have barely managed to keep one cherry tomato plant alive- that is another post.