Powdery mildew is a type of fungus that looks like flour dusted on a plant. It’s not harmful to people- just plants.

But it’s pretty harmful to plants.

Look, not to make a pun, but there are fungus among-us. They live in the soil, in the air, on our feet, and largely they’re harmless. Until they aren’t.

Our foggy weather and the general susceptibility of cucurbits mean this is inevitable.

As you can see, I’ve been letting this get out of hand. Honestly, it’s late in the season for squash I should probably just pull the plant.

But there are new flowers and baby squash on the vines…

So lets get to work!

I cut away all the awful mildewed leaves and yes- it’s time to say goodbye to the corn.

It never grew fully- the wind knocked it over- and I put it in too late. But this variety looks like it was doing ok regardless- so next year I’ll put it in on time and we’ll see how it does. 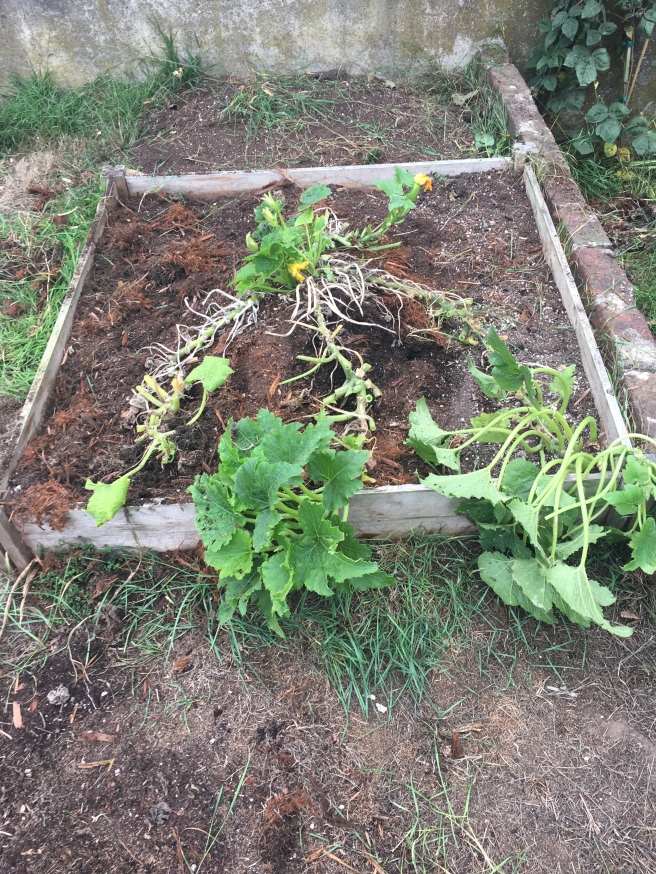 So the bed was cleared and the vines were trimmed. As you can see there is still a lot of healthy plant left.

Not loving some of those vines though.

I dusted sulfur on the exposed vines and sprayed copper on the leaves.

These are considered “organic” which is ridiculous as neither solution contains carbon but whatever.

The point is they aren’t going to poison your waterways. The copper spray most certainly can poison you- just because it’s natural doesn’t mean it can’t kill you so let’s not breath this stuff in ok?

My next step was to enrich the bed and it just so happens I had some steer manure on hand.

When life gives you cow poop- make… the lemonade of healthier squash plants?

Sorry that got away from me.

At that point the bed just needed a top up of new soil and some fresh mulch.

So this was a lot of work! To try and save a zucchini vine- in freaking November. I’m crazy right?

Well here’s my logic. If this fails, oh no I have a heavily enriched 4×4 bed with nothing in it. I’ll just plant other stuff!

But if it succeeds I just got an extra month of summer squash.

Come on baby, you can do it!

Of course the complication is- it rained yesterday.

Which means… winter is coming.

One thought on “Powdery mildew, the bane of San Francisco or; how to save a squash vine maybe”