In the distance is a palm tree. All the backyards on this block are connected, which is why we have such a feral cat problem. But it also means many years ago someone a few houses down planted a goddamn palm tree like it’s goddamn Los Angeles or something and now- in this foul freezing weather, it’s tropical-ness is taunting me.

I pulled the bolting giant flat leaf parsleys. Lesson learned. Curly leaf goes in the plot- flat leaf goes in a pot- never get giant anything, and if you do- don’t get two of them. As much parsley as I use, there is such a thing as too much parsley.

I’m going to have to cut back the blue basil eventually- but oh look at the beautiful bee. (and all her friends that were buzzing around too quick to be photographed!) There was also my favorite flying insect, those long black beneficial wasps that eat grubs. I haven’t seen one this season yet, very excited for them to get to business and eat grubs for me. I am 100% team buzzing insect. 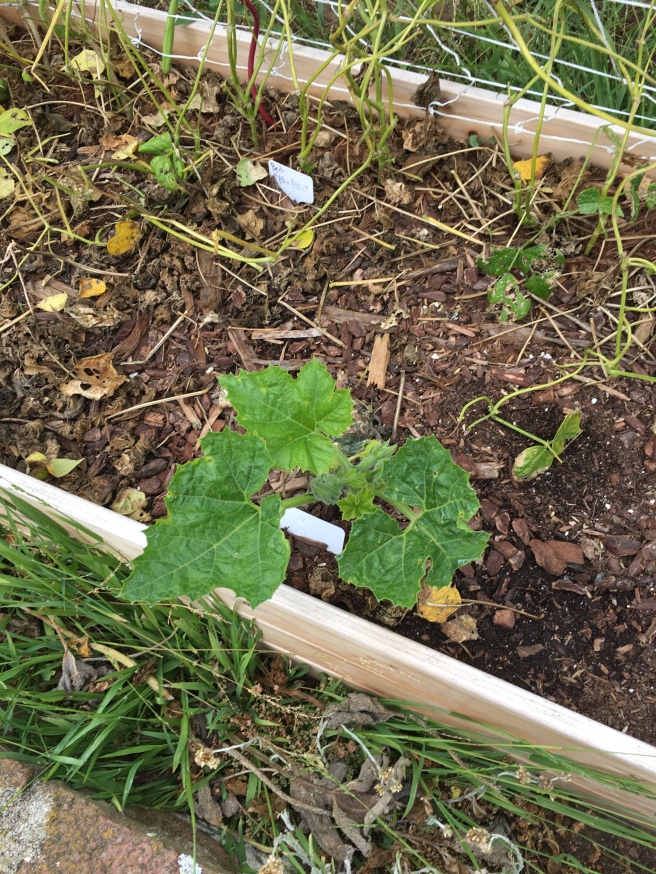 I cut back the icky yellow zucchini leaves and was rewarded by vigorous new growth. There are three buds, which is good news, and the leaves don’t look cruddy and crusty which means I cut the nasty leaves off in time. 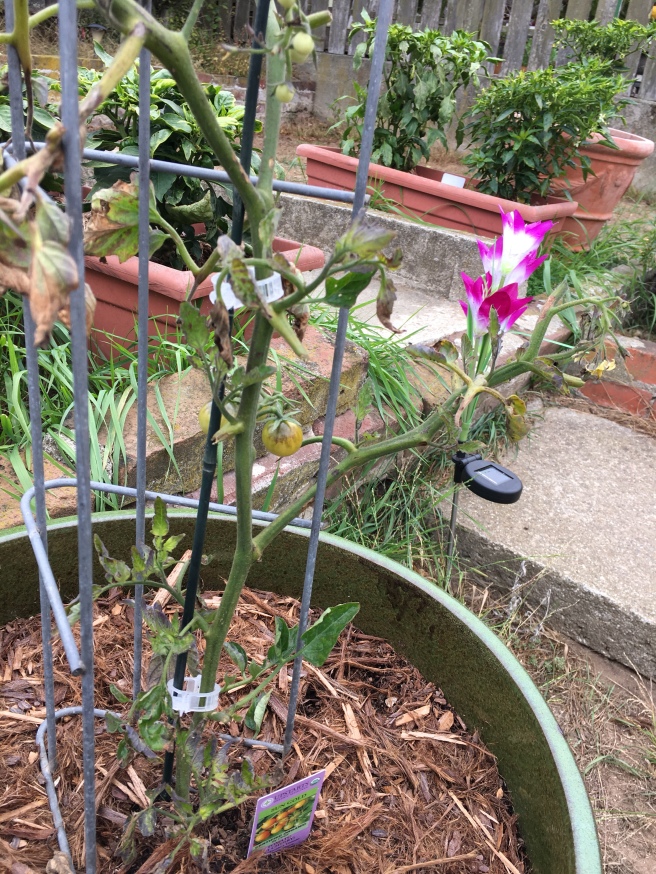 I had a little undignified panic attack about the tomato this morning. Made the mistake of reading my Pam Peirce book on gardening in San Francisco. Got convinced my tomato was diseased instead of just cold and wet. Mom snapped me out of it by reminding me that the neighbors plant isn’t doing great either, and even in the good old days her and dad didn’t always have the best luck with tomatoes. Growing tomatoes in San Francisco is a crap shoot under the best of conditions. I think tomorrow I’ll go to my local garden center and pass some photos around and get some expert opinions. Could be my current strategy of cutting off the worst of it and hoping for warmer weather is correct! Could be it *is* fungal and I need some copper fungicide or something to spray on it. Could be it’s one of the bad tomato diseases and I’ll have to throw out the plant, throw away the dirt, and sterilize the pot! (Please not this option). Nothing I can do about it today. But doesn’t it look like one of those baby tomatoes is starting to ripen? A Neanderthal can dream!

I got the last of the bean harvest today. I think in the next few days I’ll tear down the vines and the Gerry-rigged trellis. What a success the beans were! I still have bags in the fridge waiting to be pickled and cooked. It produced for almost two whole months. Imagine if I’d staggered the planting’s and had a second double bed! I’d be getting beans till September! I definitely have some planning to do.

I picked some tarragon and chives to make some cornichon style pickled beans tonight, along with the last two purple beans.

The carrots might have aphids on and off- but the roots themselves look fine, it’s just the stems and leaves. And since you don’t eat the leaves of a carrot- I’ve decided I officially DGAF. I’m spraying the darn things and it’s working- and in a month I should have some good carrots.

The peppers are somewhat of a disappointment. Only Two out of Six of the plants are fruiting… and…

Holy crap both of the sweet red bell pepper plants are fruiting!

God bless peppers and their incredible resilience in the face of crummy weather.

Also want to apologize to all the birds in my apple tree that flew out in alarm after I shouted in joy upon discovering the baby peppers.