We’ve had a relatively cool July here in San Francisco- some days were downright chilly, giving at least some truth to that Mark Twain quote that he probably never said. It’s been a bit of a nail-biter for me, worrying about my various veggies.

The zucchini plant was a late replacement for a crook neck squash plant I made a woopsie with and didn’t plant deep enough. Turns out if you plant a summer squash plant from a plant, you have to be real careful to bury the roots real good, and if you don’t the squash you get will be semi-inedible. So this bad boy, an Italian zucchini type was well buried, and started giving us a few zucchini now. But not a ton, which is very weird for summer squash, those notorious over-producers. I blame the weather. It’s just weirdly cold and damp- a damp summer squash is not a healthy summer squash, and I’m worried.

The beans don’t give a crap about the weather. The leaves look weird, some are yellow- some are cracked, they are clearly too moist- but my vines are producing like gangbusters. The favas growing are producing a bumper crop of aphids, but it doesn’t even seem to faze them, every day they’re taller.

Also nature’s aphid killer is still coming to the rescue.

It’s actually a good thing it’s a little on the cold side for my many scattered carrots- they like it a little chilly (not frosty- as if that’s a problem here).

The real problem is my nightshades. I got a little ambitious and planted quite a few peppers including this very nice shishito

This picture was taken a few weeks ago- as evidenced by the small fava beans in the background, they are now much much bigger. But the plants been doing ok, flowering and growing some baby peppers. The other 5 peppers are doing… ok. They’re growing! But only a couple are flowering and they look a little runty. There’s no guarantee any of them will do well, but at least the shishito is trying.

The real problem is my tomato. I never intended to do a tomato this year. The last time I got serious in the backyard all I had was tomatoes- as evidenced by this picture from 2012:

That’s the old patch I removed for the new full sun herb patch and I had many beautiful tomato plants with a few strawberries on the side. We got some nice strawberries that year! Absolutely no tomatoes because of what can only be described as an aphid nightmare. An aphid catastrophe. The hate I have for aphids is hot enough to sustain me through this chilly July.

So I swore off tomatoes. Too difficult! Too fussy! TOO BUG PRONE! And hey, as a good Californian, they take too much water!

And then while searching for an indoor succulent at my local garden center to cheer me up while I recovered from surgery I saw… this beautiful large, healthy, sun gold cherry tomato plant…

And I’m a gigantic idiot. 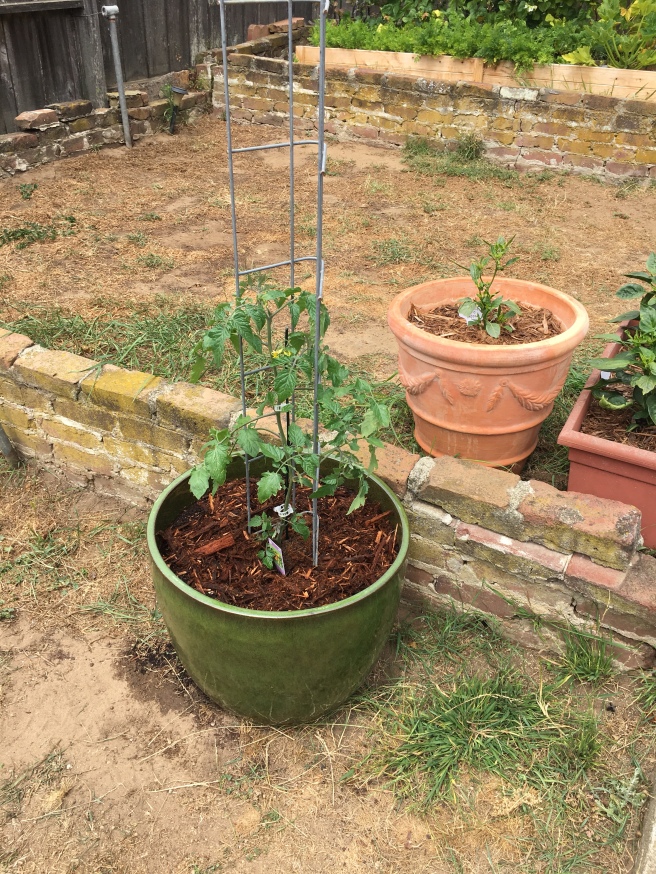 I bought the tomato her own pot, separate and away from any aphid tainted beans, I put sure start and granulated fertilizer, organic potting soil, redwood mulch; I was determined! Yes! Mid-July is a crazy time to put in a tomato! Yes! But… cherry tomatoes are easier than beefsteaks or paste tomatoes- they’re less thirsty and more productive. They’re a pretty good choice for any garden, especially one out here.

So I took a gamble.

That due to a chilly July and August I might lose.

Look at the babies. Look at those almost tomatoes!

If San Francisco weather patterns hold, (no guarantee) we should get a hot Indian summer that lasts till October. And maybe- the late heat will jumpstart the nightshades! Maybe.

So all I have to do is hope my plants are ok till then right? And then the sun will take care of the rest?

It rained lightly this morning.

I think I’m going to cry.