I had a great day today in the garden working my herb beds.

Here’s a previous shot of the shadier herb bed. As you can see the thyme is heavily overgrown. First task was cutting it back, along with the lemon balm, and weeding as best as I could.

Thyme is a great herb, I grow two types, big-leaf and French. Problem is, a little thyme goes a long way, even fresh, so the growth I had wasn’t helpful.

The thyme conquered- it was time to place the four new plants that go into this bed.

That’s the bi-colored shiso that I ripped out last year. As you can see- it has returned. Oh well.

Next to the thyme is the culantro- next to the octopus is the anise hyssop- next to the lemon balm is the lemongrass, and up in the corner is the borage. I gave everything a deep watering, and then in the next couple of days I’ll put down some mulch. 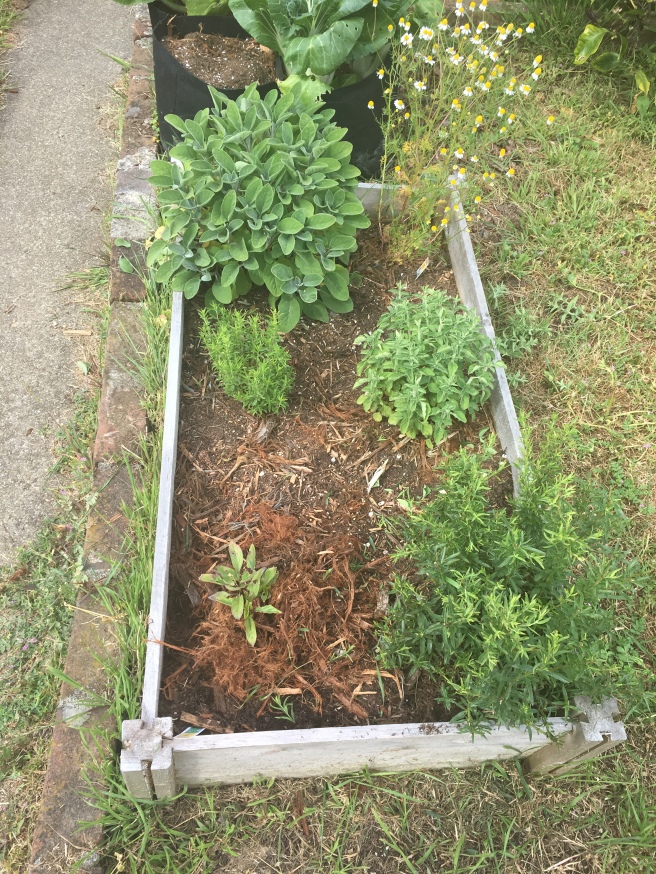 The sunny herb bed was also overgrown. I trimmed the oregano, and hacked away at the hyssop and sage. Then it was just a matter of placing my plants.

I put the purple basil next to the Thai basil, and the lemon grass next to the oregano. Yes I have two lemongrasses. I like the taste, but it also has a way of repelling pests (not unlike the borage) and I hope by having one in each bed I can have less pest problems as it gets warmer. 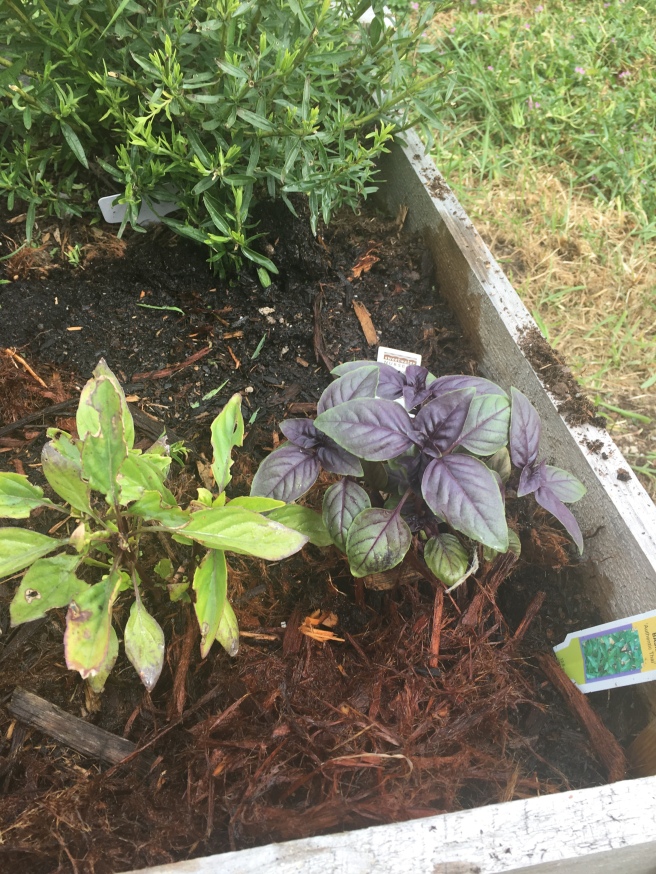 There are absolutely no guarantees when it comes to basil in San Francisco I’m afraid. As you can see the Thai basil is a chewed up mess- but it’s alive so I’ll take it. The purple basil will also be a gamble- but much less of one then Italian or sweet basil which is iffy at the best of times. Sadly the local garden center is not stocking African blue bush basil this year- or at least not yet. That’s the only basil that I’ve had very good luck with.

I’m not screwing around with the shiso. In my garden at least it has a tendency to get really buggy, and I’d like to have more for eating so pots it is! And the pots can go on the new herb tables!

I have resown the mitsuba, I have two parsley’s- one of which is going to seed, so I have to work on that. The two shiso, the chervil, the tarragon, and the two chive pots. The other herb I had to wrestle with today was my dill.

As you can see, it was a mess. So I pulled it and sowed some more.

It’s a beautiful pot of dirt. Dill is a pain in the ass, as it doesn’t transplant well. So I can buy dill seedlings but unless I keep them in the original pot I won’t get much dill, as once transplanted it tends to swiftly die. Growing dill from seed isn’t difficult, but you have to tenderly press the seeds into the soil because they need light to germinate. Not to mention it tends to get really buggy, and it attracts scale insects and aphids. Like I said, a pain. But it will work, and I use a lot of dill when I pickle so I guess I’ll just have to keep re-seeding it.

I’m looking forward to the lovely blue flowers of the borage, bees love them, but other bugs don’t.

It can also get really gigantic and I’m looking forward to my dad making triffid jokes again.

I am a Neanderthal of simple pleasures.

One thought on “Planting the spring herb beds”